In the middle of October we published an article about Bet FashionTV. This article followed on from contacts we’d received from their representatives claiming that there was no association between the recently launched Aspire Global run BetFashionTV.com and the previous Curacao regulated BetFTV.com, the previous FashionTV brand who failed to pay players even after their regulator instructed that they had to, lost their license and continued to claim they still had a license after their regulator directly confirmed for us that they were no longer licensed. Our article demonstrated that the same parent company – FashionTV Gaming Group – was the owner of the old brand and the new brand.

Following the publication of this article we received a communication from the Porat & Co Law Firm in Israel claiming to represent BetFashionTV.com. This communication laid out various demands that BetFashionTV.com expected us to meet within 24 hours or face a potential law suit in the UK. These demands included removing the review of their property and other articles critical of their parent company, issuing a public apology admitting our wrong doing to be approved by the operator and making arrangements to pay damages to the company. You can read the full communication here. At this stage we engaged a lawyer who specialises in defamation cases in the UK to review the claims being made against us and issue a response. You can find our response here.

Within 24 hours of issuing our response to Porat & Co we were contacted by a representative of Revenue Partners who had just taken on BetFashionTV.com as a client. During our communications with Revenue Partners we made clear that there was no possibility of a change in status for a group that had looked to engage aggressive legal action rather than paying players that the FashionTV Gaming Group had previously left unpaid. The Revenue Partners rep assured us that “I am helping him get in touch with the players to get them paid, but as it’s a separate client he doesn’t have their information to hand but Ask Gamblers are helping” and “I will make sure though that you don’t get any more silly letters from lawyers.” We offered on two occasions to try and put them in contact with the players who had complained to our service but no interest was expressed in this offer.

That seemed to be an end to the story. We’ve heard nothing further from Bet FashionTV, Porat & Co Law Firm or Revenue Partners.

Unfortunately a couple of days ago it came to light that someone has been engaging in a large scale effort to build links pointing towards this site and other sites with pages critical of Bet FashionTV that are intended to damage these sites ability to rank both generally and specifically for search terms related to the Bet FashionTV brand.

What is Negative Link Building?

For those readers not from an internet marketing background, a significant part of how Google decides to rank different websites in its search results is determined by the links that point TO the site. Google considers these links pointing at a site in a similar way to a recommendation. If your site has well respected sites linking to it you’re likely to do well. Similarly, it considers the words used to link to your site (anchor text) as an important indicator of relevance. If your site has lots of links from quality sites pointing at it saying ‘low price football strips’ it’s likely you’ll rank well for searches related to that term.

However links can also be used to attack your competition. If your site has a lot of poor quality or spammy websites linking to it this is likely to damage the site’s ability to rank. Again, anchor text can make a big difference here. If these links use anchor text associated with sex or pharmaceutical sales and they’re linking to a site that has no association with these things, it’s likely they’re going to cause even more damage.

Let me be quite clear about this practice – this is what would be considered a ‘Black Hat’ Search Engine Optimisation technique and it seems likely that it would be considered against the law in both the UK and US (https://www.rebootonline.com/blog/is-negative-seo-illegal/). Regardless of the law however, it’s simply unethical.

ThePOGG as the Victim

Over the weekend of the 18th and 19th of November 2017 our team ran a number of reports to check on the links that were being pointed at ThePOGG.com. Out of the top 50 most frequently used anchor texts for links pointed towards ThePOGG.com, 26 of them now featured some variation of the BetFashionTV brand:

As can be seen above, many of these anchor texts included “Cialis”, “drugs” or “Viagra” – terms that would be specifically damaging to a site like our own.

We then looked at which urls on our site were seeing a lot of new links and here is what we found: 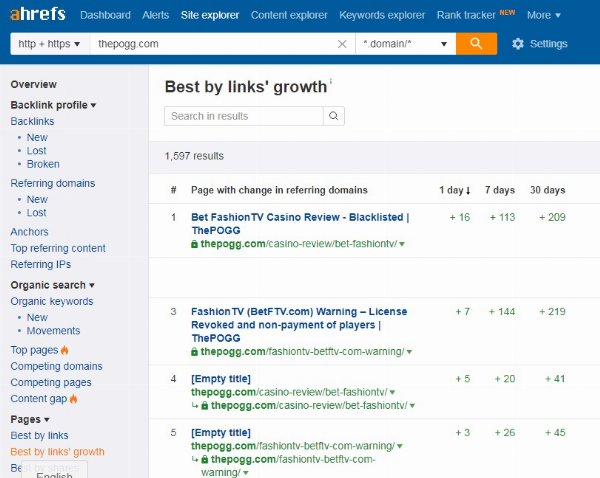 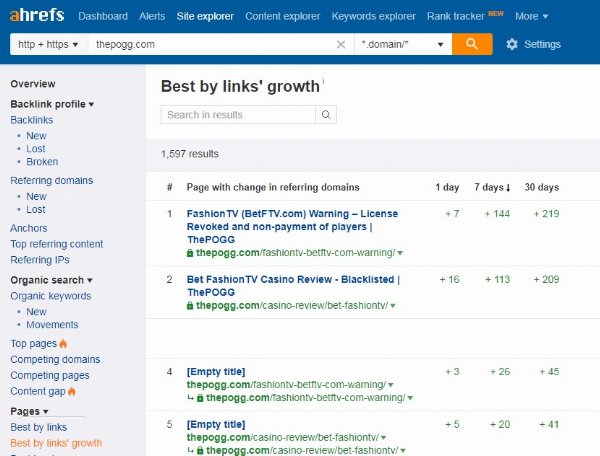 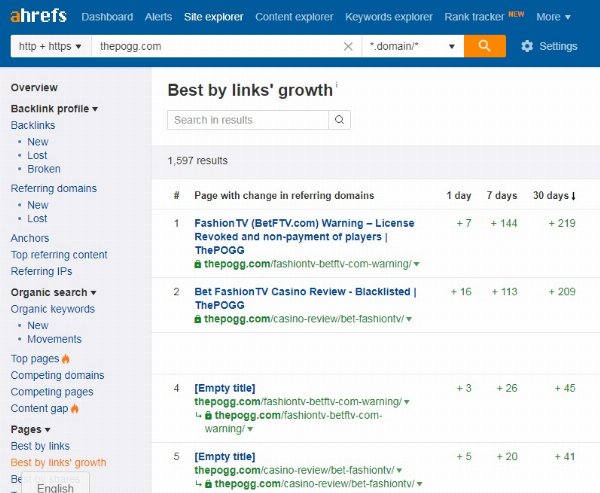 In each case (last 24 hours, 7 days and 30 days), 4 of the 5 most linked to pages are directly about and critical of BetFashionTV or their parent company.

Overall we’ve had to use Google’s Disavow tool to tell Google clearly that around 500 domains that have linked to us in the last month are nothing to do with any action we’ve taken.

Between the links coming in from low quality domains, the high frequency of use of the FashionTV brand name, the use of sexual pharmaceutical anchor text and the pages being linked to being critical of the FashionTV brand, this activity bears all the hallmarks of someone specifically making efforts to prevent our pages from ranking for search terms in Google related to the BetFashionTV brand.

ThePOGG aren’t the only Victim

This pattern didn’t stop there though. We went through some of the sites that had set up links to our FashionTV related content and came across this particular domain:

What’s interesting about the above page is that alongside both our Bet FashionTV Casino Review and our recent blog post about the FashionTV Gaming Group, several other well-known online gaming review sites are included in that list:

Each of the pages linked to in that list is present on a strong site that ranks well for FashionTV related brand terms and publishes content that is specifically critical of Bet FashionTV, its parent company or its predecessor, in the very least within the page titles which are most often displayed by Google in the search results (both AskGamblers and NoDepositCasinos have the word 'Blacklisted' within their page title/).

Seeing this we decided to run similar reports for each of these domains. I’m not going to post screen shots of these reports as I have for ThePOGG above as I don’t feel it’s fair to publish this information about other sites, however I will say that for each of these sites the results were similar to our own. FashionTV brand related anchor text appeared frequently within their top 50 most commonly selected anchor texts and in each case their FashionTV related content was the most linked to content over the previous 24 hours, 7 days and 30 days.

Below you can see graphs showing the number of domains linking to each of the four sites over the last 30 days.

In each case you can see a steady and above standard increase in the number of domains linking to the site between the 8th and 10th.

We have forwarded on reports on the negative links that have been built to the admin team at each of these sites.

It’s very obvious from the above that someone is trying to stop pages that are critical of the Bet FashionTV brand from ranking in search engines for FashionTV brand terms. Can we say with absolute certainty that anyone at Bet FashionTV is behind this? No. There is clear incentive for Bet FashionTV to engage this strategy but it is possible that some competitor could be trying to discredit Bet FashionTV by engaging in link building that would tarnish their name when discovered. Before any reader draws a conclusion however we feel the following points should be taken into consideration:

Our opinion would be that this would seem to be a very convoluted and inefficient scheme to discredit Bet FashionTV to have been implemented by any competitor and if this was the case they’ve chosen to target only sites that already were overtly critical of the FashionTV associated gambling properties meaning that no significant change in status was likely in any case. That being the case we consider it unlikely that this has been any sort of set up and far more likely that this is simply another disappointing chapter in the history of a highly questionable brand.

As a final note we're still seeing around 20 new domains with the offending anchor text being detected every day.