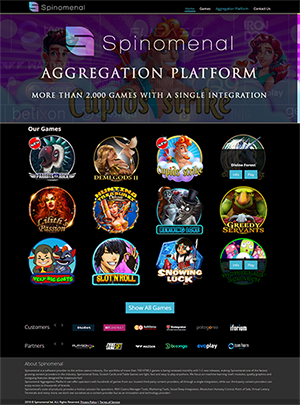 Spinomenal is one of the newer software developers in the online gaming market. Alongside many of the smaller casino software providers Spinomenal focus heavily on Slot Games. Spinomenal have a strong focus on slots games and only provide a partial suite of of casino games that is missing most major table games. Their games catalogue currently includes 90 slots games, a Roulette game and some lottery games. They do not offer any Video Poker games. or card games. In terms of slots games, Spinomenal offer games that are generally very graphically appealing whilst not quite competing with the highest quality as the top end of the market, have a clear gaming interface and offer an autoplay setting that allows the user to select between 5 and 99 spins to play automatically and include autostops on any win, a win of a specific size, if your balance increases or decreases by a defined amount and when any bonus feature is triggered. There is no 'turbo play' setting when playing Spinomenal games. The House Edge/RTP of the Spinomenal slots games is listed within the paytable for the newer games in their catalogue. For the older games, as Spinomenal is partnered with UK licensed operators and the UKGC license requires the publication of this information RTP figures can be found on numerous casino sites. Their games start around 2.8% (97.2% RTP) but do drop as far as 7% House Edge (93% RTP) which is significantly more expensive than the average game being released currently. As such players should ensure that they check this information before selecting a game from the Spinomenal catalogue. This ranges is at the high end of the range commonly being seen in modern slots games and ranges to above average cost for the sector. The bonus features offered in Spinomenal games range from generic free spin features or click and pick features in their older games, to more entertaining and original features in the newer games. Spinomenal don't offer a product that would do well in the modern market as a primary provider, they lack the range of non-slots games to outfit an entire casino platform, but they do make a reasonable addition to game catalogue when a more significant main platform is already in place.
Discuss in Forum Submit a Complaint