We currently use ChangeDetection.com to monitor the terms and conditions pages at hundreds of casino operators. This system produces hundreds of reports of changes every day. Most of these are nothing more than changes to winner lists, popular games, or calendar dates. However on Tuesday the 19th of September 2017 we received multiple alerts of changes that were of a significant and highly interesting nature.

Initially the reports coming through were of changes to the Cyberrock Entertainment N.V. group showing the following term change: 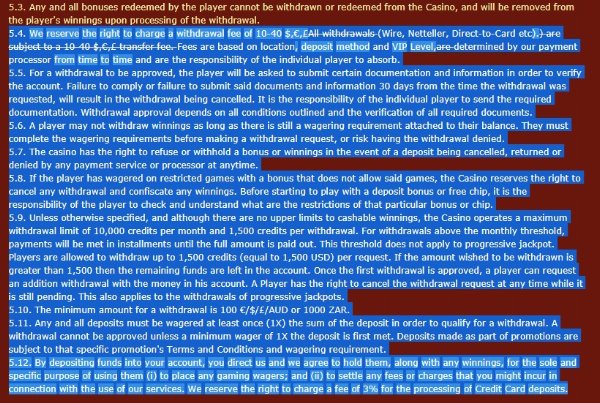 However I then noticed reports coming through for the Real Vegas casino group showing an identical term change:

These two groups of operators are supposedly entirely unrelated and operator on totally different software platforms (Cyberrock Entertainment N.V. primarily use Rival software, though there are some Betsoft and other providers mixed in while the Real Vegas properties use Real Time Gaming). It would be highly unusual and improbable for two groups under different management to make word for word the same term change on the same day. If one was copying off the other there would be a delay between the originator publishing the new term and the copy group identifying the change and updating their own terms.

Looking at the screenshots above it became clear that it was just the term changes that were identical, the documents themselves look to be nearly identical in structure so we decided to use the Copyscape compare tool to get an idea of just how similar the tools were:

As can be seen from the above comparison Copyscape found these documents to be over an 80% exact match. In fact, if you review the sections that Copyscape has not identified as matching you’ll see that the most significant mis-match is the final sections of the document, representing nearly 20% of the total document. Manual review of the mis-matched sections make clear that this is actually an error with Copyscape and that the sections are in fact a perfect match other than the brand names being used. This would make the documents far closer to a 99% match than an 80% match.

While this is the first time we’ve seen any direct evidence linking either of these groups of operators this shouldn’t come as any great surprise to any well informed reader. Both these groups have held Blacklisted status at ThePOGG.com for several years now. In our opinion they are both individually amongst the most dangerous operators that a player could choose to play with.

The Real Vegas group are a serial offender in terms of non-payment of winnings to players and are entirely unresponsive to complaints submitted to this service.

The Cyberrock Entertainment N.V. group run on a platform provider that has made legal threats against affiliates when their forum members were reporting factually accurate information and appears to have had historic ownership ties to a game testing company that were supposedly doing independent testing for them. They are also entirely unresponsive to complaints submitted to this service.

Beyond the general similarities in their approaches to managing player complaints there is one more glaring connection from the past – both groups have been tied back to Rome casino, a now defunct operator who were widely Blacklisted in their own right when they were active.

CasinoMeister identified ties between the Real Vegas group, then going by the name Curgam N.V. and Morriyen Investments, the company that owned Rome casino and the other properties in that group back in 2011 (see - https://www.casinomeister.com/forums/casinomeister-warnings/28626-curgam-malta-ltd-avoid-all-casinos-group-post453115.html#post453115).

In another post in 2015 by one of the members of the CasinoMeister forum a poster claimed that a payment to Rockbet casino, a Cyberrock Entertainment N.V. operator, was taken from their Neteller account with the payee name listed as “www.romecasino.com” (see https://www.casinomeister.com/forums/casino-complaints-non-bonus-issues/65523-rockbet-casino-doesnt-want-pay-me-dont-play-there-post666592.html#post666592). The poster provided screen shots of Live Chat conversations with Rockbet support about this issue where the operator acknowledges that this transaction was to them. The url would be the same url used by the Rome Casino owned by Morriyen Investments when that casino was in operation.

In our mind there is little doubt that these two groups are one and the same, the term documents similarities are just the latest connection between the groups, and by the looks of things the connections go back a lot further than players have been aware of.

We now consider these groups to be owned by the same people.

One of our forum member forwarded on the German language version of the Real Vegas terms and conditions. This contains no less that 17 instances of the brand name '21Grand'. You can see a translated screen grab below:

For the full Change Detection screen captures see below:

The casinos associated with these groups are as follows: