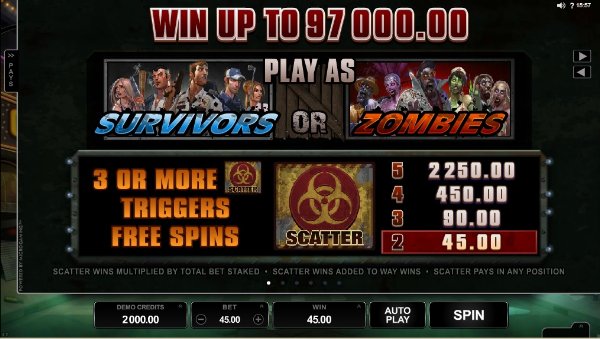 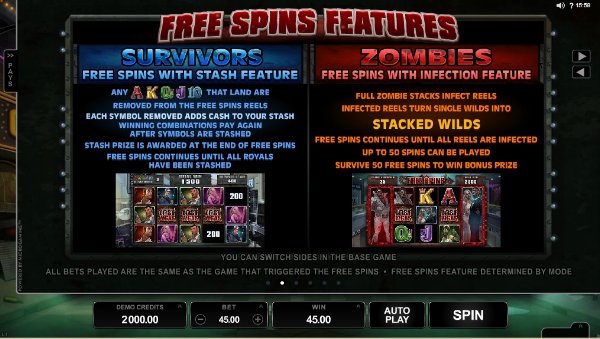 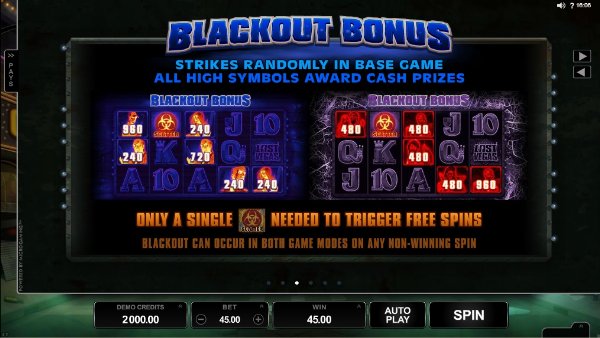 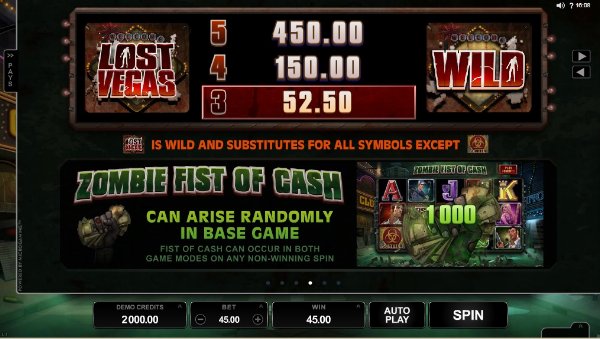 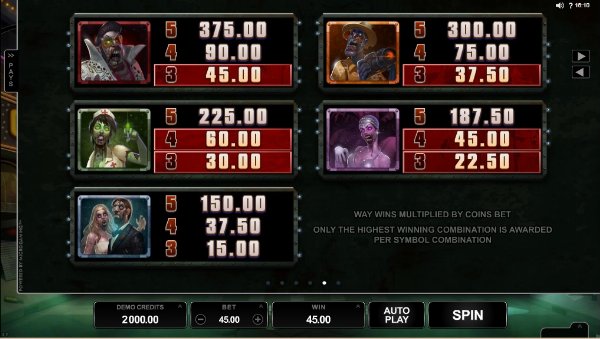 The Lost Vegas slots game can be found at Microgaming casinos. Microgaming as a standard now publish the slots house edge information of all their games at any online casino that holds a UKGC license (this is a requirement for all UKGC licensed casinos. As such we can say that the House Edge of Lost Vegas is 4.00%. When playing at any venue that does not hold a UKGC license and does not specifically publish the Return to Player information for their game, this information should be used as a guideline only as we cannot confirm whether or not this game is configurable.

What bites in Vegas may not stay in Vegas.

Lost Vegas is a 5 reel game that does not use standard paylines. Instead any 3 or more matching symbols in any position on adjacent reels starting from the left side of the reels constitutes a win. This is equivalent to 243 standard paylines. You can bet up to 15 coins on each spin.

There are three bonus features when playing Lost Vegas. The first bonus feature is activated when you receive 3 or more of the ‘Biohazard’ scatter symbol anywhere on the reels. When this happens you go into complimentary spins mode. The specific feature you receive depends on whether you’re playing as the Zombies or Survivors:

Survivors – While free spin mode is triggered all symbols 10, J, Q, K and A you receive will be removed and award a cash prize that is banked at the top right of the reels. Each time a symbol is removed, the symbols above drop down to fill the space and new symbols drop in the top. This can create new wins. This process repeats until no new 10, J, Q, K or A symbols are received. The complimentary spins end when you have collected at least one of each of the 10, J, Q, K and A symbols.

The second bonus feature is activated randomly at the end of a non-winning spin. When this happens the reels ‘blackout’ and all high symbols (non-10, J, Q, K or A) award a random prize. Additionally while Blackout mode is engaged a single Biohazard scatter symbol will trigger the complimentary spins bonus feature.

The third bonus feature is triggered randomly at the end of a non-winning spin. When this happens a zombie fist will rise up over the reels and award a cash prize.

With a reasonable House Edge, player choice of bonus features and a genuinely entertaining and engaging bonus feature Lost Vegas is a real winner and one we’re happy to recommend to players.