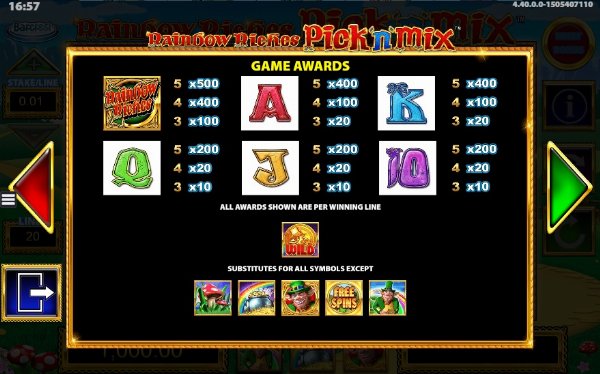 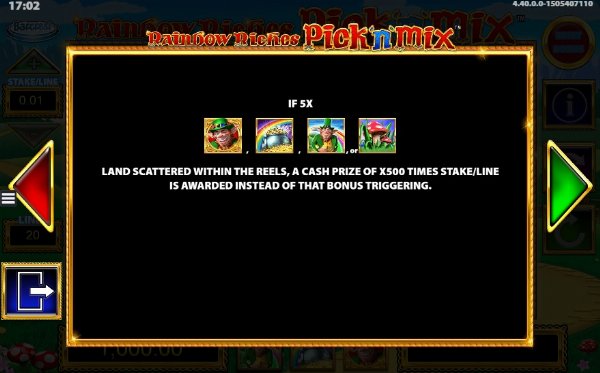 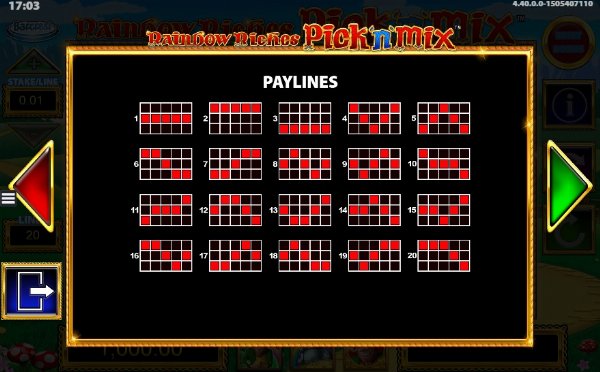 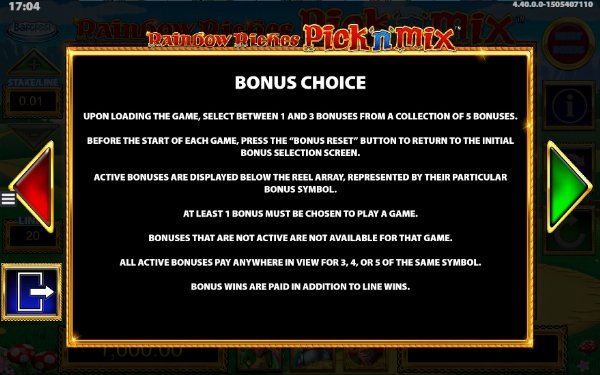 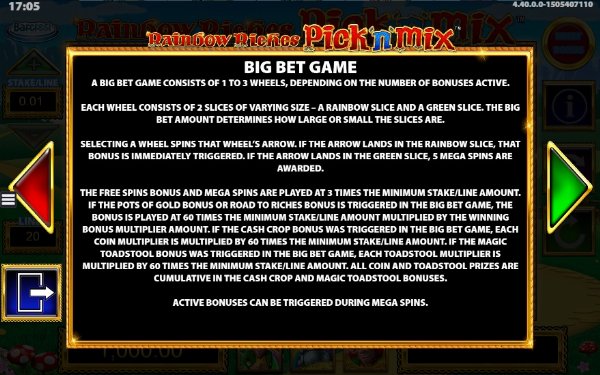 The Rainbow Riches – Pick ‘n’ Mix slots game can be found at online casinos offering WMS Gaming software who are a wholly owned subsidiary of Scientific Gaming. WMS Gaming do not publish their RTP or House Edge figures as standard. However UKGC licensed operators who now publish all game figures as standard. As such we can say that the House Edge of Rainbow Riches – Pick ‘n’ Mix is 6.00% when playing less than 1 credit per spin, 4.00% when playing 1 or more credits per spin and is 2.00% when playing the Big Bet feature. As this figure has not been confirmed by the software provider we cannot confirm whether this game is configurable or not. As such this figure should be treated as a guideline only when playing at any operator that does not publish their RTP figures.

Rainbow Riches is back with another instalment of colourful fun.

The ‘Gold Coin’ symbol is Wild.

There are six bonus features when playing Rainbow Riches. When the game first loads up you will be given the choice between 5 bonus features, of which you can select up to 3, which will be included within the game. If you select less than 3 the features you do select become more likely to occur. These bonus features are as follows:

- Road to Riches – When this feature is activated you are taken to a new screen showing a road lined with multipliers. Spin the wheel to move positions along the road. When the wheel lands on ‘Collect’ the bonus feature ends and the multiplier you land on is applied to your triggering bet.

- Pot of Gold – When this feature is activated you are taken to a new screen showing the Leprechaun surrounded by pots of gold, silver and bronze, each with a multiplier attached to them. The pots will spin and when they stop the pot in front of the arrow pointer is the multiplier that will be applied to your triggering bet.

- Cash Crop – When this bonus is triggered you will be taken to a new screen showing 50 gold coins. The coins will spin, some showing a 1x multiplier others showing nothing. When they stop all the multipliers showing are added together and applied to your line bet. A large gold coin spins. On one side of the coin is ‘Collect’ and the other is ‘Go On’. If you click on Collect the bonus feature ends and if you click Go On you play a second round with 2x multipliers. The player can again Collect or Go On to a third and final round where the multipliers are either 5x or 10x.

- Magic Toadstool – When this bonus is triggered you will be taken to a new screen showing 24 toadstools. You are awarded 3 picks. Each toadstool you select can reveal a multiplier which will be applied to your line bet or a fairy. The fairy will reveal the prizes underneath 3 more randomly selected toadstools. The bonus feature ends when you run out of picks. When you run out of picks you may randomly be awarded an additional pick. This can happen multiple times in the one round.

All of these bonus features are triggered when you receive 3 or more of the corresponding scatter symbol anywhere on the reels.

The sixth bonus feature is activated by playing the ‘Big Bet’ feature at the start of the spin. When you click on this button you will be taken to a new screen showing one dial for each bonus feature you selected at the start of the game. The dial is split into a green section and a rainbow section. The size of the bet determines how large the rainbow section is. Click one of the dials to spin the pointer. If the pointer lands on the green section you’ll be awarded 5 complimentary spins. If the pointer lands on the rainbow section you will automatically trigger the bonus feature associated with that dial.

Rainbow Riches – Pick ‘n’ Mix is simply fantastic. A fantastic selection of bonus features. The only small negative would be that this game is clearly offering its best to the high roller, but that best is one of the lowest House Edges we’ve seen for a slots game and a great bonus feature so that negative’s not enough that we’re giving less than 10/10.