The owner of the website “Legend of Gambling” announced two days ago that he would be shutting it down. The site will cease publication as of the 6th of September, with nothing more than a statement on the homepage now available for anyone to read:

“Due to multiple personal threats including personal harm against me and my family, I’ve decided to shut down my website.

I guess this is how millionaires do things and its not that big of a loss as this website has made 0 revenue.

If you enjoyed my content and want to throw a little dono, its appreciated.

Regardless to everyone have a great day.”

Just 5 days prior to the announcement, Legend of Gambling made claims about live streamer and N1 Casino affiliate Roshtein that questioned the streamer’s honesty.

The alleged offence arose during one of Roshtein’s live streams on the Twitch platform. Roshtein was asked to during the stream to prove that he was not playing in demo mode. Roshtein obliged by exiting the slot he was playing (“Gonzo’s Quest”) before opening up another in demo mode in order to highlight the difference between the two.

This topic was discussed at great length on the Casinomeister Forums and covered at Casino Gazette.

Below you can see a screenshot that highlights how much money was in Roshtein’s account during his real money play on “Gonzo’s Quest”. 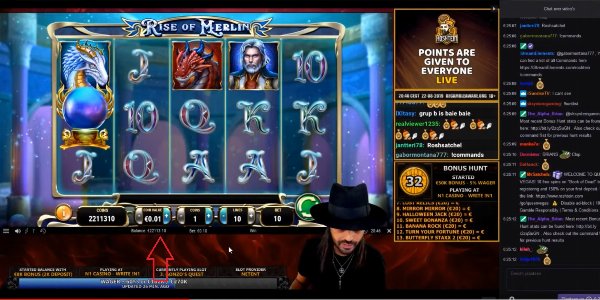 What makes this confusing is that a real money balance should not have transferred over into the demo game. I would go as far as to say that I have never heard of this happening to anyone before. All demo games give the player a large amount of imaginary cash to play around with, but the number is normally a very round one, like 25,000 Euros, not an amount as specific as 22,113.10 Euros.

The publication of the story sparked massive interest on the Casinomesiter forums, with some of the more vocal participants calling out N1 Casino and Roshtein himself, asking for an explanation.

A response from N1 Casino was forthcoming with an apparent representative for the casino, stating that:

“…roshtein playing with real money at N1 casino. And from what I know - it's impossible to somehow show play money and real money. At least at N1.”

When pressed further they went on to say in relation to the accusation:

“I do not know and to be honest not really interested to spend my time investigating it. I know that there is no fake money with Roshtein, and I can prove it to any regulator / judge if needed. It's simple fact.

As for the thread - I think even such amount of posts shows how Roshtein is popular and even bad PR is still PR. Or not, I do not know, and honestly I think I can leave it to him personally.

What I should care about - N1 casino. And as a representative of this brand here - I confirm that all his transactions is real.”

Despite the assertions made by the N1 rep there were still those on the forum calling out for more than just confidence in the legitimacy of Roshtein’s play, with calls for real evidence being asked for on more than one occasion.

Before continuing I want to be clear that no one at the ThePogg is passing direct comment on the Roshtein and Legends of Gambling story specifically. However, when we consider the "slots streaming" community more generally some basic maths should have us all questioning whether these individuals are genuinely risking the funds their videos would have you believe they risk.

The first issue to note has to be the size of the bet that many of these streamers play with. 10, 20, even 50 Euros or Pounds a spin will, when they trigger a win, generate hugely impressive numbers. But they can also quickly result in losses of tens if not hundreds of thousands. The short term variance at these stakes can be huge. By selectively highlighting the sections of the streamer's play where large wins occur on the videos posted to sites like YouTube, viewers can quickly end up with a significantly skewed perspective of the likelihood of winning.

But this leads to the next question - if streamers like Roshtein are playing with real funds, how much are they actually losing to generate these wins that they showcase?

While we cannot comment on any individual's specific experience the RTP figures that are provided by most software providers today provides and effective yardstick to draw some conclusions about expected loss rates. The longer someone plays - and these streamers are effectively professional players - the more likely it is the player's results will gravitate towards the mathematically expected return rates. Whether the bets you make are big or small the house will always have the edge and as such if you lay bets as weighty as the ones that certain streamers highlight then it's very likely you are going to lose a lot of money and quite probable that you are going to do so very quickly.

Using the Roshtein example, I popped onto his streaming thread while preparing this article and made a 1min video of his play which you can see below:

A quick Google search for how much streaming time Roshtein engages over the course of a week give us the following answer:

It could be argued that streamer's do not always play at this speed, so maybe the figure's lower than this. Perhaps, but given that the top 10 videos that came up when we searched 'Roshtein' in YouTube 6 out of 10 featured him wagering at 50EUR/spin and another showed 40EUR/spin (only one showed a bet lower than then one we saw at 10EUR/spin), it seems more than reasonable to conclude that our above estimate of expected losses could well be on the conservative side. We've also been conservative by going with only 4 days per week of play and counting exactly 28 days in the month. So we've built in a lot of tolerance to our figure in an effort to account for variation in play levels.

Slots streamers are affiliates - they make their money by referring depositing players to casino operators. We've been in the business a long time and for any affiliate of a decent size you can quickly figure out the average value you are seeing returned for each player. Even if we gave a fairly optimistic estimate of a value of 100EUR/player, that still leaves Roshtein having to refer 1552 player/month just to break even. We don't know many affiliates that could sustain this type of overhead and remain profitable. ThePOGG would be short of achieving a break even point by a VERY long way if we needed 1.5k player registrations per month.

So what are the possible explanations for streamers who play at this level? As far as we can see there are 3.

i) The streamers are independently wealthy and simply using the affiliate referrals to offset their losses somewhat. I would question the likelihood of this. It seems unlikely that someone with a large bank balance is going to want to spend time filming themselves playing video slots for such extended periods of time.

ii) These streamer are quickly going to bankrupt their businesses as it seems almost certain they will be losing large amounts of money playing this way.

iii) Losses are being offset for streamers significantly by the casino operators.

For our money i) and ii) simply don't seem likely. That leaves iii). Operators could be offsetting these specific streamer's losses in a variety of ways. The funds in their accounts could simply be 'dead money' - a balance that is put in an account that the streamer knows can never be withdrawn. Perhaps they receive a lot of bonus funds to top-up the balances they receive. Or maybe they have massive cashback on losses agreements with the operators they are playing with. Regardless of how this is happening, the result is the same - the streamer is effectively not really playing at the stake that the game shows as their downside risk is being significantly offset.

If this is the case then it sets a false precedent, one that many would deem to be immoral, especially at a time when gambling addiction has risen to such prominence within the public consciousness. The illusion that this could create being that anyone can make lots of money playing slots as long as they are willing to bet big. Disclaimers at the end of the videos do not seem to us to remedy the illusion being created by selectively cutting presenting big winning sessions and playing at unrealistic stakes.

The purpose of this article is not to directly accuse any individual of any nefarious actions - perhaps these streamers really are pulling in the player volumes that would account for these losses, or maybe there is some other explanation that we haven't considered. What we are looking to do is encourage readers to apply some reasoning to how much of what they see on these streams they believe. Foster a healthy sense of scepticism about the wins they see. Maybe it is all entirely upfront and real, but no-one's a loser if you take what you see with an extra large scoop of salt.