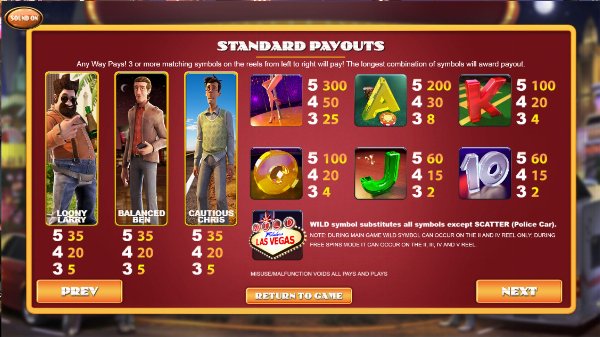 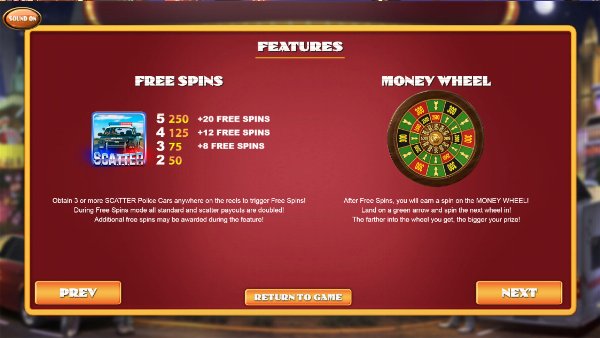 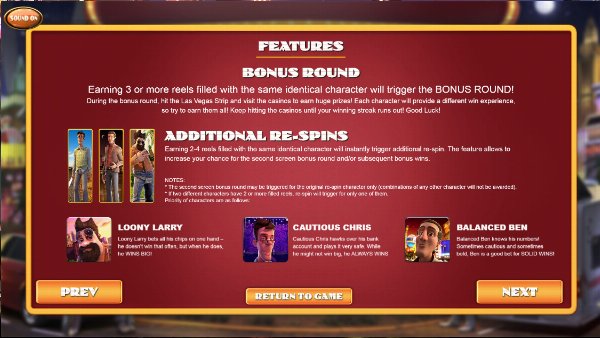 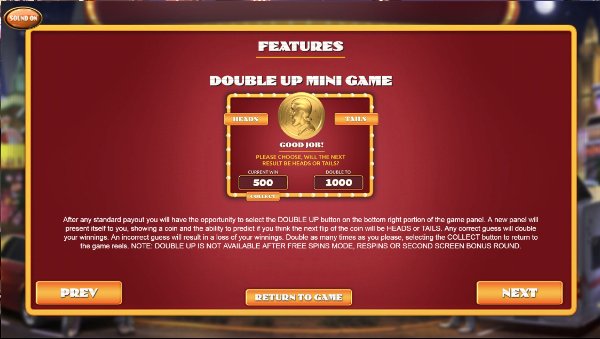 The Weekend in Vegas slots game is produced by BetSoft. BetSoft are one of the smaller slot development companies on the market at the moment and have recently started offering their own casino platform. The company was founded in 2006, entering the slots market 4 years later. Betsoft do not always publish the Return to Player (RTP)/House Edge information for their slots games within the game help files, meaning that we often need to refer to RTP provided by an operator. As such we know that the house edge for The Weekend in Vegas is 3.4%.

The Weekend in Vegas game has 5 reels and each reel is 3 symbols high. The game does not use traditional paylines, and instead pays out when you land combinations of symbols. You need to reveal 3 or more matching symbols from left to right to win .

Wild – The Vegas Strip Sign symbol is Wild and will substitute for all symbols other than the Cop Car symbol. The Vegas Strip Wild symbol can only appear on reels 2 and 5.

Free Spins – The Free Spins symbol is the “Cop Car”, with 3 or more needed to trigger the feature. The Cop Car symbol is a Scatter and will pay out with combinations of 2 or more, anywhere on the reels.

Free Spins – If you trigger the game’s Free Spins feature by landing 3 or more of the “Cop Car” symbols anywhere on the reels you will be awarded 8 Free Spins. More symbols will earn you more free spins; with 4 “Cop Car” symbols gaining you 12 Free Spins and 5 earning you 20. During the feature, all Scatter wins are doubled and additional spins can be won.

Bonus Wheel – At then end of the Free Spins feature you get to have a spin on the Bonus Wheel. You can win a cash prize or advance to the next wheel where the prizes will have more value.

Bonus Feature – Once you have triggered the game’s bonus feature by landing 3 identical character symbols on subsequent reels you will take on the persona of the character who has triggered the feature for you and make your way to the tables in Las Vegas.

Loony Larry will bet all his chips in one hand, meaning he will lose it all quickly or you’ll gain the biggest bonus prize.

Cautious Chris will spread his bets out. He won’t win a lot but he will always win.

Balanced Ben falls between the previous two characters in terms of the size of the bets made.

Additional Re-Spins – 2 or more character symbols on subsequent reels will award a re-spin, with those characters sticking in place. 5 would take you straight to the bonus round, without a re-spin.

Double Up – After any win you can risk what you have earned by pressing the Double Up button. You bet half or all of your winnings and will win or lose based on the toss of a coin, with you guessing which side will be revealed. You can attempt to double up as often as you like, until you lose.

Weekend in Vegas has all the glitz, glamour and gambling that you’d expect from a game set in Sin City. The 3 party goers are all very different in their approach to gambling, something that adds a little variety to the bonus game. Speaking of which, the game also comes with Free Spins, a bonus wheel and wild symbols. The house edge is average, meaning that the game offers some value to go along with the entertainment on offer.