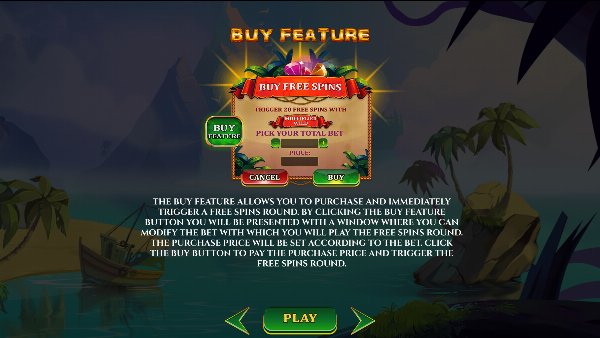 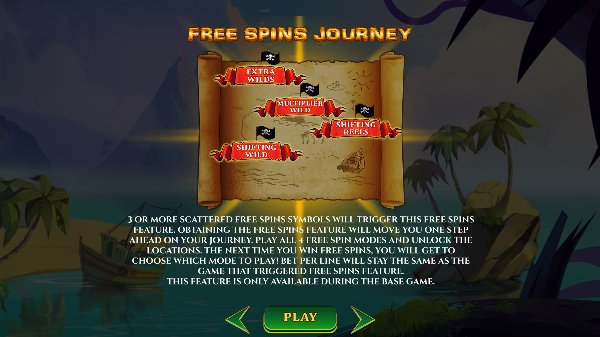 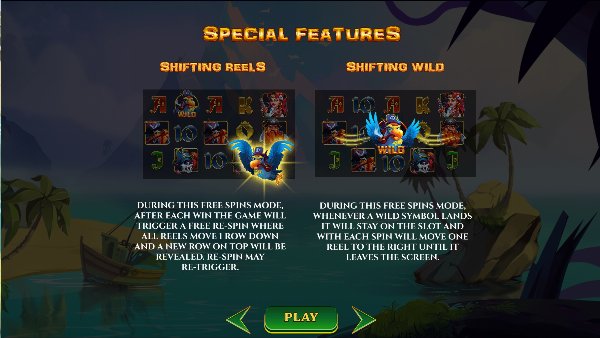 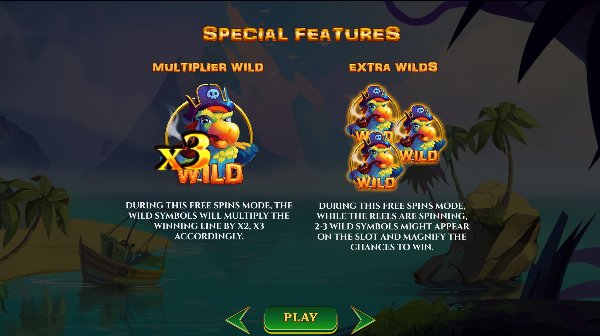 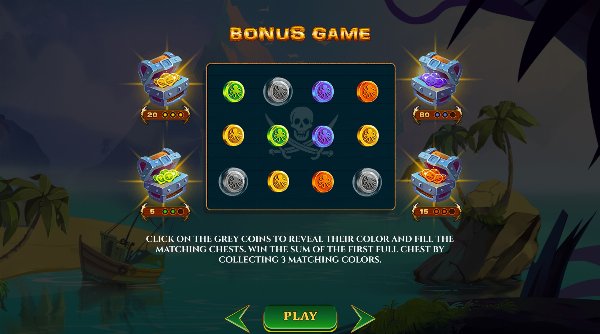 A Pirate’s Quest can be found at casinos offering Spinomenal software. Spinomenal is one of the newer software developers in the online gaming market. Alongside many of the smaller casino software providers Spinomenal focus heavily on slots games. The House Edge/RTP of the Spinomenal slots games is listed within the paytable for the newer games in their catalogue. However, in this instance, the house edge for A Pirate’s Quest has not been made available and as such we do not have all the information needed to record a full review of the slot. This will be reflected in the conclusion and the overall score, both of which are subject to change once this information becomes available.

A Pirate’s Quest is a 5 reel game that is 3 symbols high. The game uses 50 standard paylines, playing from left to right.

Wilds – The “Parrot” symbol is the game’s Wild symbol, substituting for all symbols other than Free Spins and Bonus symbols. 5 Wild symbols on a winning payline will award a x300 multiplier.

Free Spins/Scatters – The Free Spins “Steering Wheel” symbols are Scatters and 3 or more will trigger the game’s Free Spin feature. These are only available during the base game.

Bonus – The Bonus symbol is the “Chest”. 3 or more will trigger the game’s Bonus feature. These are only available during the base game.

Mystery Symbol – After the reels have stopped, if there are blank “Mystery” symbols on the reels they will uncover and reveal 1 random symbol, excluding bonus and free spin.

Win Multiplier – During a spin a Win multiplier may be added to the reels. This happens at random and can be worth x2, x3, or x4 the bet. This is only available during the main game.

Free Spins – 3 or more of the “Steering Wheel” symbols will trigger 20 Free Spins. During the feature there are 4 levels that you can play through. Each time you trigger the feature you will move on to the next level and once you have triggered the feature more than 4 times in a single session you will be able to choose which of the levels you want to play. Each level is described below.

Shifting Reels – During this level, after each win all the rows will drop down one so that the bottom row disappears and a new one is added to the top in what essentially amounts to a re-spin and another chance to win.

Shifting Wild – During this level, whenever a Wild symbol lands on the reels it will remain in play, moving one reel to the right with each new spin until it disappears off the reels. More than one Shifting Wild can appear at once.

Multiplier Wild – During this level all Wilds will come with either a x2 or a x3 multiplier.

Extra Wilds – During this level there is a random chance that during each spin an additional 2 or 3 Wilds will be added to the reels.

Bonus Game – If you trigger the bonus game you will be taken to a new screen surrounded by 4 chests with a number of grey coins in the middle. You turn over the grey coins to reveal their colour and then they are added to the corresponding chest. Once a chest has had 3 coins added to it you will be awarded its bonus and the feature will end.

Buy Feature – At any point you can elect to pay to play the Free Spins feature. To do so will cost you 30 times the bet, but you will be allowed to move straight to the 20 Free Spins.

Without information about the house edge it is difficult to properly evaluate this slot, especially as there is a buy now feature that you would expect to alter the house edge when triggered. However, the slot does look good and there are a number of features worth mentioning. The Free Spins are good fun and the different levels make them different each time you play. A word of caution would have to be that the Free Spins are designed in a way to keep you playing and knowing when to stop could be more difficult if you are trying to unlock that next level feature. The bonus feature is a traditional click and reveal tile flipper and you can have random line multipliers appearing out of the blue. With the information I have I would say this is a good slot but cannot say much more until the all important house edge is revealed.