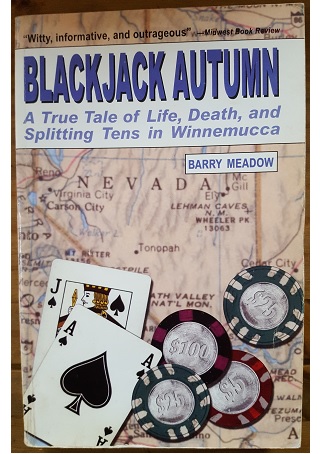 "Sometimes I was king of the casino, the biggest winner in the whole damn joing. And sometimes I was a blackjack pinata, pummeled by dealers having their own private party."

You can buy Blackjack Autumn here.

In 1998, Barry Meadow loaded up his car with a suitcase of clothes, $8,000 and an almost instant sense of regret. He regretted taking so much time away from his fiancée and son. He regretted leaving his business unsupervised while he was gone. He regretted not having a bigger bankroll. He worried about returning home broke, but even more about what he would be returning home to.

His plan was to count cards in every casino in Nevada. Best case scenario, he would win big and recoup some of the money he lost in the stock market. Worst case scenario, he could write a book with all of the stories he collected. I don’t want to spoil the ending, but the ending is really not the reason to read this book. What happens within those four thousand miles are some of the most exciting and entertaining adventures you could expect from someone spending two months locked inside casinos doing one of the most boring pastimes a person could choose.

Barry Meadow got his start in harness horse racing in the 1980’s. After several successful years he switched to thoroughbreds. During his career he has written numerous books as well as circulated several newsletters through his publishing company TR Publishing. His writings have been a fantastic resource for topics like handicapping, statistics, money management, betting tips, and racetrack guides. In the late 1990’s he began to supplement his income by playing blackjack and beating online casinos, both of which he wrote books about.

Now, after 40 years of professional gambling, he still contributes to various publications including American Turf Monthly. He is also working on a new book of the same name. You can see him featured in the documentary “Players: The Blue Collar Gambler”.

For most recreational card counters, this is the road trip that everyone dreams of taking. It’s one man travelling the open road and battling every casino along the way. At the same time, this is the story that every recreational counter needs to hear. One man travelling thousands of miles alone to find mostly unplayable games and hopelessly low table limits. The game conditions are bad and the living conditions are sometimes worse.

“Here I am in some godforsaken, trailer-filled town playing in a four-deck game with bad rules, joined by two poor players, with half a dozen drunks at the bar and one guy playing quarter video poker. Surely professional gambling can’t have much less glamour than this.”

But he does manage to find some gold left in those old mining towns. In one casino, he wins every chip on the table (the only table in the casino!) and has to wait for a refill before the game can continue. In another casino, he finds a game dealt all the way down to the bottom of the deck. With only a few cards left in the deck he is able to make plays that seem crazy, like hitting a 16 against a 2 and not splitting aces against a 6. These are the types of plays that most card counters will never see in their entire careers!

But there is more to this book than just gambling stories. Barry includes a lot of historical information about each city as well. We get to hear the stories of their sudden boom and eventual bust. (Spoiler alert: It’s almost always from mining.) We learn about the people who built these towns and how they abandoned them just as quickly. We get to meet some of the locals and hear about their lives, like Jack at the Exchange Club who was promoted from cook to blackjack dealer. And Matthew at the Burro Inn, who deals the only blackjack game, works the cashier’s booth, brings drinks from the bar, and helps take care of the coffee shop. And Patches the train-hopping dog! Barry shows us the glitter and gaudiness of Las Vegas, the majestic beauty of Lake Tahoe, the calm friendliness of Laughlin, and everything in between. Every mining town, military town, and even a nine-hole golf course in the middle of the arid desert.

And all the while, life is still continuing without him at home. His son’s car gets broken into and robbed. His ex wife visits his home to find his son throwing a big party there. His father is suffering from Alzheimer’s in a nursing home. His business is falling behind. His relationship with his fiancé is becoming strained. All of these things are getting worse with every day he spends on the road and he is feeling increasingly helpless. When you add in the emotional swings of gambling, life can feel unbearable.

“When you’ve had a miserable day, depression hits you like a nagging migraine that won’t go away. Nothing removes your gloom. You keep thinking of the money you had but no longer have, and of the hours stolen from the rest of your life. If only you’d taken your son to the park, or gone skating with your wife, or just rested on a Jamaican beach instead of spending your hours in a casino.”

And Barry’s brutal honesty makes this book much more poignant. He openly talks about playing slot machines, sometimes for several hours at a time, losing back some of his profits and later regretting it. While he could have easily (and justifiably) left those parts out, the fact that he includes them is very admirable since it makes the book much more authentic. Many players will find that once they spend a lot of time in casinos they begin to notice “leaks” in their game and in their personality. It may be a small gradual leak or a large infrequent leak, but it needs to be addressed by the player if they expect long term success. These leaks can add up quickly, and the reader is given several warnings about this.

This is probably my favourite book of Blackjack stories. It really gives the reader a sense of the loneliness, boredom, fear and regret that can creep into the mind of a professional gambler. Yet Barry’s upbeat attitude and wonderful sense of humour make it seem like an exciting adventure. There are many times when you completely forget that he is spending long hours on dark, empty roads in order to reach the next decrepit town with a dinky casino in it. You almost don’t recognise that every day is the same smoky room with the same slot machine noises and the same ugly carpet and depressed employees and worn-out tables with filthy chips. Barry has done the impossible – to make full-time card counting seem…almost fun.

And if the well-written stories aren’t enough, there is no shortage of blackjack knowledge as well. Being able to tag along with a full-time card counter is a great opportunity and Barry shares lots of great advice and hard-learned lessons from his long career. This is one of those books where aspiring Advantage Players will learn a lot, experienced players will directly relate to the experiences, and everyone will be entertained.