Within this article we will reveal our 4 favourite penguin slots games and will also be questioning how aware you are them.

Penguins, a flightless sea bird (an extra fact for you there) are native to quite a lot of the world. Most commonly found in the Antarctic and sub-Antarctic, they can be found as far north as the equator. Some of the smarter penguin species have discovered that hanging out in the Galapagos is much less brutal than the minus 40 degrees that the most famed and arguably most masochistic emperor penguin likes to chill in. 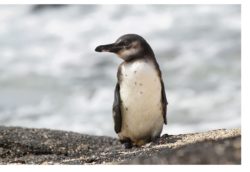 The Galapagos is the only penguin to make it into the northern hemisphere, so any Santa games we look at (you know who you are!) that contain penguins have already proved that the designers of the games are definitely not very aware of penguins.

These guys deserve some special attention because they hold another record that singles them out from the rest of their feathery brethren. They also happen to be the rarest of all penguins, with an estimated 1,800 to 4,700 left alive in the world today. This is panda, rhino, tiger territory. I guess the Galapagos penguin gets less press than pandas because other species of penguin are managing to thrive in their more hostile environments.

So there’s your first piece of penguin awareness, all thanks to the ridiculously cute Galapagos penguin, the only penguin to live in the northern hemisphere and also the rarest.

Time for more awareness. Did you know that penguins can also be fairies? If you thought the Galapagos penguin was cute, well you aint seen nothing yet. The fairy penguin is the smallest species of penguin and so freaking cute it is not allowed in the Antarctic in case it melts the ice. 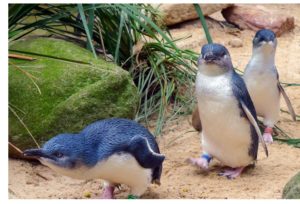 Also known as little penguins, fairy penguins can be found along the coasts of southern Australia and New Zealand. They have a blue hue to their feathers, which helps to give them the 3rd name of blue penguin.

The awareness of these super cute little critters has grown so much over the years that an entire tourist enterprise has built up around them. You can spend some time on Philip Island Nature Park and when the evening comes and the “penguin parade” begins you can catch sight of these tiny birds making their way along the beach as us humans perch in our own sizable colonies on top of viewing platforms to take it all in. This is just one of a number of tourist opportunities that have sprung up in the area as we flock to try and get our fill of one of the cutest creatures in nature.

Before we move on to the next penguin awareness fact it’s worth noting that the fairy penguin might look cute but any animal that can eat a third of its body weight in food in just one day is a mighty champion who we should never underestimate at the sushi buffet.

If penguins were celebrities then you’d have a whole host of fictional birds queuing up to take the coveted award for most famous penguin in the world. Having said that, off the top of my head all I have is Pingu and the ones from the Madagascar movies… 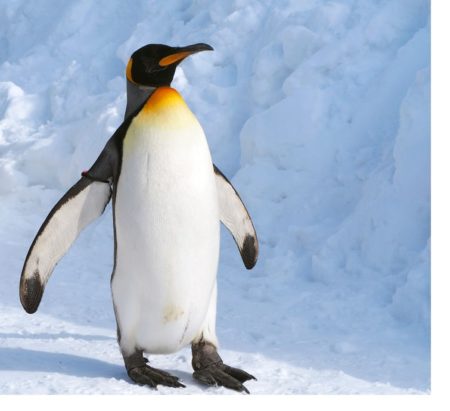 But in the real world there is only one contender. He’s the Pavarotti of the penguin world. The Frank Sinatra of the feathery swimmers. The King of the Antarctic, without every setting foot in the place. Ladies and gentlemen I bring your awareness to, the one, the only (although the current Nils is the third incarnation of of himself), Sir Nils Olav. Knight of all penguins. Brigadier of the Norwegian Royal Guards. Forget whatever the panda might be called, for Sir Nils Olav is the most illustrious resident at the world famous Edinburgh Zoo.

A king penguin, Sir Nils never let not being an emperor hold him back. Born in 1972, Nils had to wait 10 years before his greatness was properly recognised. Presented to the zoo by the Norwegian Royal Family (I have no idea how Norwegians got to be in charge of penguins) Nils needed a decade of being the best, most handsome penguin in the world before he received his first title. But from his appointment as Corporal in 1982, Nils has never looked back. In all Sir Nils has had 7 titles bestowed upon him, the most recent being Brigadier in 2016.

According to the zoo Sir Nils has “received these honours and medals due to his outstanding service and good conduct.”

In other words, Sir Nils Olav is a stand up chap. A good lad. A sound fella. Penguin keeper Stewart McGecky summed up just how tremendous he is in this fittingly emotional tribute:

“It’s very much a strange thing to be telling the public about but they do eventually believe you and are very taken back by it. The fact that he’s the only knighted penguin in the world and also the only knight of Norway, he’s very very special.”

McGecky went on to say that, ““He definitely sees himself as the most important penguin here. He does kind of big himself up a little bit!” and that, “Some of them, especially the younger birds will follow him around which he likes to start with but gets a little frustrated with them and gets annoyed with them.”

What this proves is not only do all humans know that Sir Nils is the best penguin in the world, all the other penguins, including Sir Nils also know it. To be respected by the wider public and your contemporaries is something that only the like of Dylan and Bowie could have dreamed.

We are now aware that some penguins live north of the equator, that some are tiny cute tourist attractions and that some are living legends but do you what the biggest penguin of all time is?

If you’re thinking emperor penguin then in your face and hold on for some serious penguin awareness. The emperor penguin might be the largest penguin alive today but back in the day he was right down the pecking order.

Named the colossus penguin after fossils were found in Antarctica suggesting that this extinct relative of today’s penguin could have been 2 meters tall, weighing in at an impressive 115 kilograms.

The science name for the colossus is Palaeeudyptes klekowskii, which would have lived somewhere between 37 and 40 million years ago. Carolina Acosta Hospitaleche of the La Plata Museum in Argentina said that this was “a wonderful time for penguins, when 10 to 14 species lived together along the Antarctic coast.”

What a time it must have been to be alive and an incredibly tall penguin. It is estimated that the colossus could have held its breath under water for 40 minutes, enough time to miss the entire first or second half of a rugby match or bake a family sized lasagne.

Not much else is known about the colossus other than obvious things that could be applied to all animals that are larger than most. It would have laid bigger eggs, eaten more and had less leg room on the bus.

That feels like perfect moment to end our fulfilling session on penguin awareness and dive right into the games that have been inspired our favourite flightless bird (ostriches suck). 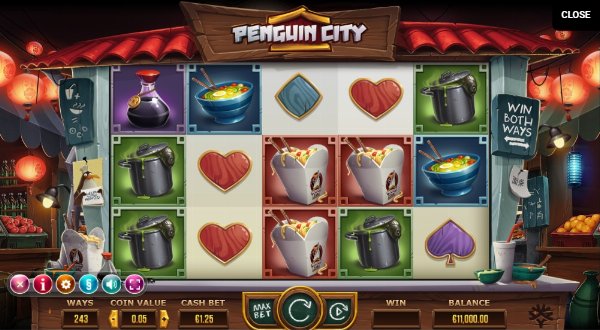 The first game on our list is the excellent looking Penguin City from Yggdrasil. It’s one of those games that you just need to stop and gaze at for while before you start pressing any buttons. Time, lots of time, has clearly gone into making this game look incredible, with a detailed set of reels that are circled by penguins going about their daily business in a Chinese city that, as the name suggests, clearly belongs to them. Whilst the crossover between Chinese food and penguins is lost on me it didn’t stop us giving Penguin City a cracking review when it was released last summer. There are a few features of note, with the super fun Penguin Escape bonus that is an inventive take on your standard free spins and some stacked wilds to keep you entertained throughout. 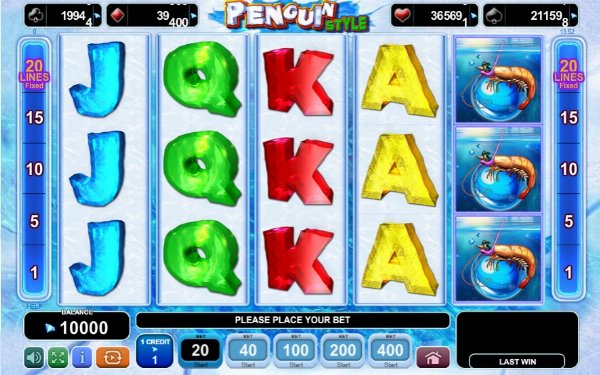 Penguin Style has the hard act of having to follow Penguin City. I say that because it is also a good-looking, well-designed game, but can’t quite touch the dizzying heights that the first entry on our list reached. However, something that Penguin City does not have is a penguin wearing a hat, which is exactly what the wild symbol in this game is doing. And if that wasn’t enough there is a shrimp wearing a snorkel whilst riding a giant bubble. Where this game comes into its own and where it leaves Penguin City eating its icy dust is with the number of features it has to offer. There are free spins, a progressive jackpot, stacked wilds and stacked scatters keeping you pretty busy as you spin those reels. 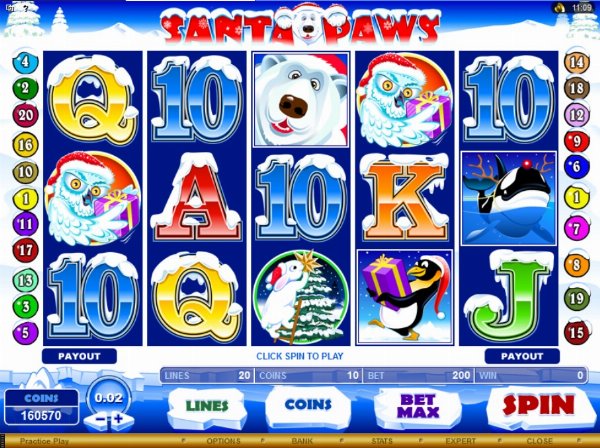 Santa Paws is a game with a lot of learning to do. Either the software developers had no idea where Santa comes from when they made the game or they had no idea where penguins come from. Either way, never the twain shall meet. OK, so it might not be Christmas and there might be issues with the geography but this is still a great game and there are still penguins in it. The symbols are seriously bright and cheerful looking. The free spins come with a multiplier and the there is even a gamble option for anyone who likes to take the occasional risk. 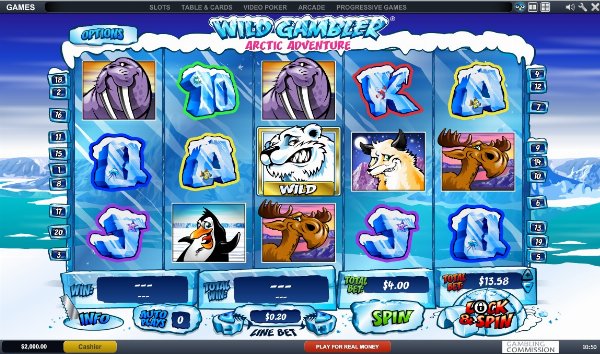 The final game on our list is another one in need of some serious penguin awareness. Penguins do not live in the Arctic! You have got your poles all wrong here people. Away, despite this mistake the game scores pretty highly out of 10 for us, essentially because it comes with two very interesting features, looks decent and is offering relatively decent value for money. The lock and spin feature allows you to choose certain symbols to turn into locked wilds. The good news is that this feature is also available within the free spins.

An honourable mention goes to Spinomenal’s Snowing Luck, a game that needs to see a reduction in its house edge before we can add it to such a prestigious list.

So there you have it. Some penguin awareness to get ready for the big day on the Sunday. There’s at least 4 penguin related things that you might be more aware of now and there might be a few slots games that you are also more aware of.