For those of you not aware of this issue, in April this year it came to light that NRR Entertainment – the group that owned BringIt Affiliates (now called 'Max Affiliates'), SlottyVegas and BETAT – had changed ownership. During discussion of an affiliate stats issue, the person who had consistently represented himself as the owner of the group made a post on Casinomeister stating that he had left the business. You can read the post here - https://www.casinomeister.com/forums/threads/betat-bringit-affiliates-issue.83387/#post-904011. During this period there was also a rebranding of the company from NRR Entertainment to Max Entertainment.

Businesses change hands regularly within the gambling industry and ordinarily this would not represent a major issue. However, two factors made this more of a concern in this instance. Firstly, the BringIt related properties had gained significant coverage with certain reputable portals (including ThePOGG.com) on the basis of the CEO’s direct and personal efforts to ensure any issues were addressed. This type of direct interaction went a long way to building trust. When the CEO left, that no efforts were made to let the parties they had built these relationships with know that they were no longer part of the business is disappointing. Having built the brand’s reputation on these interactions, failing to ensure a smooth hand-over significantly erodes the trust that had been built.

However, the more significant issue is that the group were not cooperative or forthcoming in providing information about who the new owners actually were and rumours started to circulate that the new owners were in fact associated with a widely rogued group. We received information from three separate sources within the industry indicating that this was the case and all pointing to the same group – Vulkan Casino and their associated properties. Due to the group’s lack of transparency on this issue they ultimately lost sealed status here and Accredited status at Casinomeister (https://www.casinomeister.com/forums/threads/betat-and-slotty-vegas-into-the-grey-zone.83792/). That said, they were not moved to rogue status with either service, simply downgraded until such time as more information was made available.

What’s the Problem with Vulkan group?

The main issues with this group are:

i) They are one of the most prolific culprits in the distribution of fake versions of popular games. These games are in the first instance illegal – they infringe on the original distributor’s copyright – and in the second, entirely untested and as such cannot be confirmed to adhere to the original game’s settings. This secondary point means that players are being mis-sold a NetEnt or Novomatic game and for all anyone knows could be getting charged far more for the experience. We consider this tantamount to cheating and will not work with any operator found distributing these pirated games.

We identified issues with the games being distributed by this group as far back as 2014 but this issue has received wider coverage now:

ii) Recent reports on this group have indicated that the people controlling these sites may be involved in wider criminal activity:

What was Max Entertainments response?

In our opinion, not a lot. They denied any connection to any group associated with the distribution of fake games, but were not forthcoming about who the owners actually were. Months went by and no information was provided either publicly or privately.

In the name of transparency in August I did receive an invite to visit their offices in Malta to address this issue, but due to a breakdown in communication this was never finalised and as such never happened.

Despite emphatically denying any connections with this group both publicly and in private communications to ourselves and other services, this change seemed to contradicts these denials.

I posted information about this on the relevant discussion thread on the Casinomeister forums - https://www.casinomeister.com/forums/threads/betat-slotty-vegas-ownership-questions.84642/page-7#post-968203

A couple of days later a response to this post was made by the Casino Manager for this group:

“Vulkanbet.com - We have recently reached an agreement with Trustly to launch their no registration product for the German market in the coming months. Global Innovations is a company who own(ed) Vulkanbet.com(a German facing brand and completely unconnected to the hundreds of other “Vulkans” online), and we took the opportunity to acquire it for our new Trustly product which will be converted into a German facing No Registration casino in the near future…… There’s no shortage of “Vulkan” brands online, and if one of these brands is deemed a rogue operation, it certainly does not mean that all should be unfairly accused of wrongdoing in the same manner.”

This was followed-up with a direct statement on the issue:

“No Bryan, we have absolutely nothing to do with them. To my knowledge, that brand belongs to Playson group. There's agreements with loads of genuine game providers on the brand(vulkanbet.com), which would certainly not have been possible should this brand have been implicated in the Novomatic case..

Vulkan was a large network of casinos in Germany and this is the reason why it was bought to offer trustly no-reg to german market.

There's so many Vulkans around... I dont have a list of the ones which belong to the owners of the ones implicated in the novomatic fake slots case. This one certainly has not though..”

The bells of truth

The above statement’s from the group’s Casino Manager seem reasonable. Could it be that the VulkanBet that they now clearly do share an association with are in fact entirely unrelated to the wider Vulkan family which has been associated with extensive problematic activity? Unfortunately, the evidence simply does not support this.

Previous denials of any association with Vulkan casino

The first point I’d make here is that less than a year ago this group were denying any association with the Vulkan family of casinos. Even the suggestion of association was damaging to their brand. In the intervening months we are expected to believe that they chose to purchase an operator using exactly the same brand name and with marked similarities in their logo (stylised ‘A’)? When so much capital was expended asserting that there was no relationship with rogue Vulkan group, why out of all of the operators that they could have purchased – and there are thousands of sites on the net, not to mention they could simply have set up a new brand to fulfil their business ambitions – would they choose to buy a brand that so closely resembles the very group they insisted they had no part of? At best this seems like a monumentally stupid business decision that if totally innocent is still going to leave many people believing what they’d worked so hard to deny. Our experience of this operator is that the people in charge are far from stupid.

This line of reasoning is subjective though, common sense suggests that something doesn’t fit, but that does not prove a connection to the Blacklisted group. People make strange decisions at times.

Now we get to something that is not subjective.

When Casinomeister published their original rogue report on the Vulkan group (https://www.casinomeister.com/casino-reviews/vulkan24-club/), they used a nifty little site called ThreatCrowd.org. The ThreatCrowd website describes the service as follows:

“The ThreatCrowd API allows you to quickly identify related infrastructure and malware.”

At the time Casinomeister identified fake Novomatic games (this was confirmed by Novomatic) being run on MaxBetSlots.com and entered the serving address (https://maxbetslots.monkeyboxsrv.com/) to ThreatCrowd. This gave out the following map of properties connected to the server distributing the fake games: 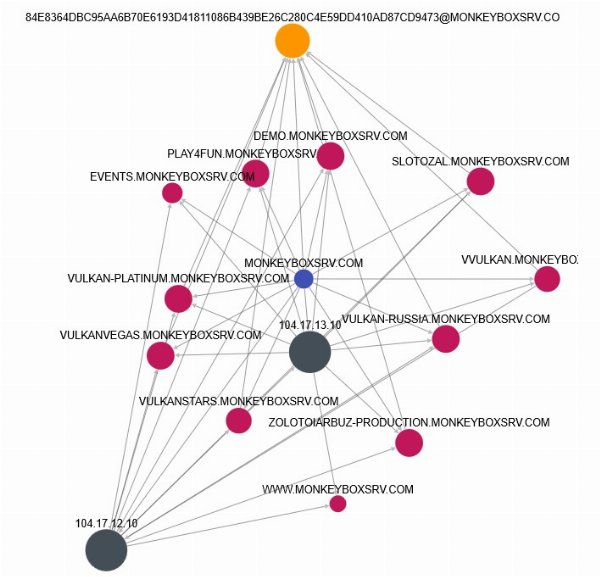 And here’s how the same search looks today: 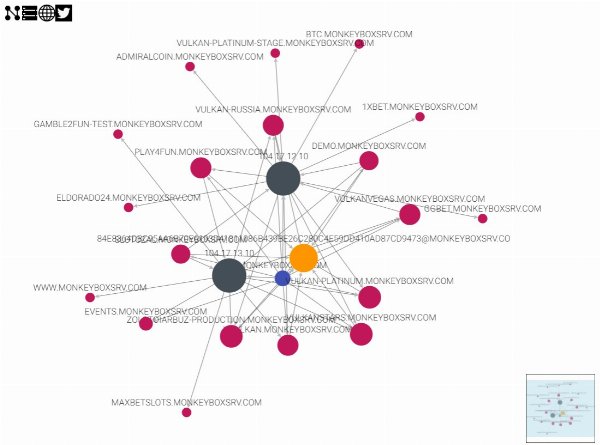 Putting aside the fact that the above charts show an array of brands that have been identified previously as running fake games (a host of ‘Vulkan’ brands, Admiral, 1xBet [the identified use was on sister site 1xBit], Eldorado, Slotozal, MaxBet) what is specifically interesting about the above maps in the context of this conversation is one of the other properties that appears on it – VulkanVegas.com. This name appears both when Casinomeister carried out the original search and when we conducted our search. 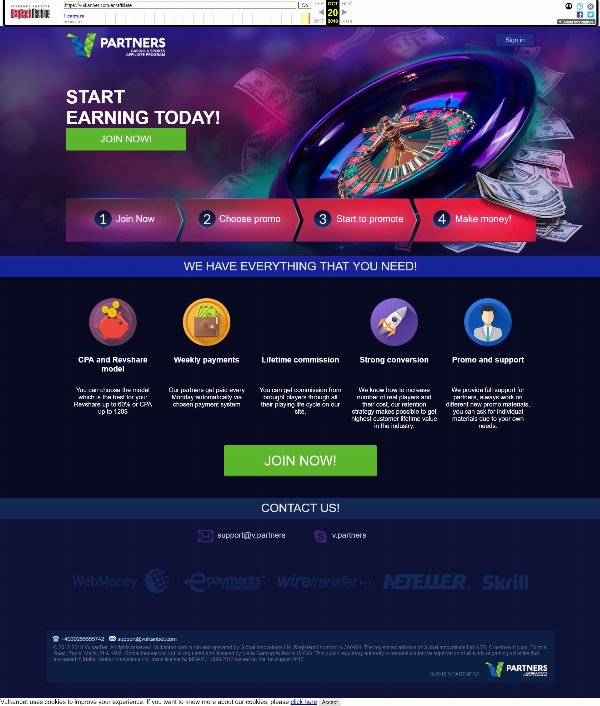 Perhaps the representatives of Max Entertainment simply didn’t know about these connections? I find that a little implausible myself as I’m aware of some of the information that Max Entertainment had available in April regarding the Vulkan related properties and it would not have taken a great deal more investigation to turn up what I’ve shown here (significantly less work than would already appear to have been done).

Perhaps Max Entertainment just didn’t think that these types of connections were relevant to this discussion? Perhaps they feel that as long as the property they bought was never specifically identified as having run fake games itself, then any association with other properties associated with this group that were involved in the distribution of fake games should not be relevant to them. We couldn’t agree with this position.

While I certainly would not assert this as fact, it would seem logical to conclude given the connections that have been demonstrated between VulkanBet, V.Partners, VulkanVegas and the other properties that have been implicated in the distribution of fake games, that VulkanBet.com was set up as the ‘clean’ brand by the same group that was distributing the fake games to allow them to legitimately access the more tightly regulated markets. Hence it having an MGA license and not distributing the fake games itself.

To go back to the statement issued by the Max Entertainment Casino Manager:

“There’s no shortage of “Vulkan” brands online, and if one of these brands is deemed a rogue operation, it certainly does not mean that all should be unfairly accused of wrongdoing in the same manner.”

We would entirely agree with the above. But that only applies to Vulkan brands that are actually entirely independent of the Vulkan properties that have been caught doing something wrong (for instance, the major chain of offline German casinos who’s brand appears to have been hijacked by the online rogues). Where the brand in question can be tied to the group involved in the rogue activities then there is nothing unfair what-so-ever in highlighting these associations or making players aware of them.

Even if this is simply a case of an entirely unrelated company buying the VulkanBet brand, our position would be the same as it is whenever someone new claims to have taken over a previously owned brand – there are pros and cons to buying an established property rather than setting up a new one. The pros are that you get an already functioning business and player database (depending on the agreement). The cons are that the reputation of the brand you buy is now yours. Good, bad or ugly. In this case Max Entertainment have chosen to associate themselves with a group of operators that we wouldn’t touch with a ten foot pole.

When you play in the mud, you're going to end up dirty.