Net Entertainment Favourite Given the Megaways Treatment in LeoVegas Exclusive 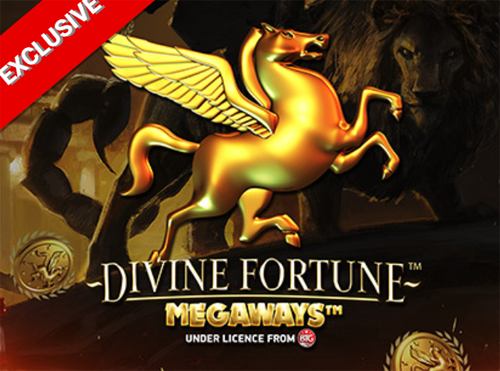 Divine Fortune is considered by many to be a Net Entertainment favourite. Today it has seen new life breathed into those tired reels, thanks to a collaboration with Big Time Gaming that (for a short time) can only be played in LeoVegas Casinos.

The original Divine fortune was released back in 2017, which might not seem all that long ago, but in the life of a video slot 3 years is more than a lifetime for most.

Divine Fortune is centred around Greek mythology. There are Pegasus symbols, Medusas and minotaurs, to name but a few.

It is a deceptively simple slot that looks like it might spring multiple surprises but actually has its laces tied pretty straight.

With a Bonus, Free Spins, a Jackpot and respins, there is plenty of very orthodox video slot action on display here to keep you engaged.

When it was released 3 years ago we were so impressed that we dished out an almost unheard of 9 out of 10, making it one of our favourite slots of that year.

We particularly liked the overall design of the slot, which at the time was about as good as gets. This is one area of the game that has not change, but I would argue that slot design has come a long way in that sport space of time and nowadays we would be less impressed than we were in 2017.

This big difference this time around is the inclusion of the Megaways game mechanic.

That single mechanic is what Big Time Gaming has hit the big time with, something that is even clearer to see now that Net Entertainment have jumped on board the Megaways ship too.

One thing to be aware of if you do choose to play is that the house edge has increased, meaning that if you play this version you are more of a disadvantage than if you played the original.

This is the 5th LeoVegas exclusive slot in little more than a week and it appears to be a strategy that the operator will continue with over the foreseeable future.

You can check out our Leovegas Casino reviews here.