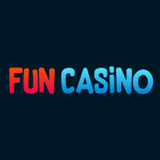 Fun Casino - русский hold our Deposit Guarantee seal. This means that if you are treated unfairly by this operator ThePogg.com will return your deposits. For full terms click here.

Players from Netherlands are welcome at Fun Casino casino.