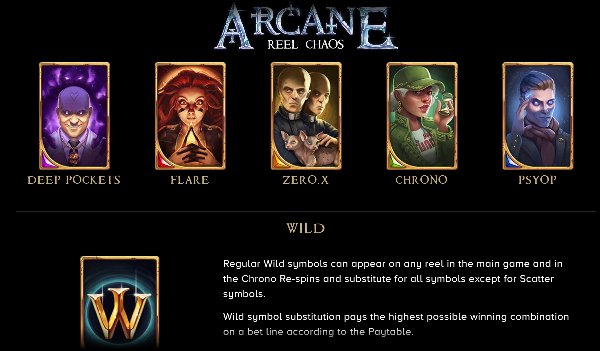 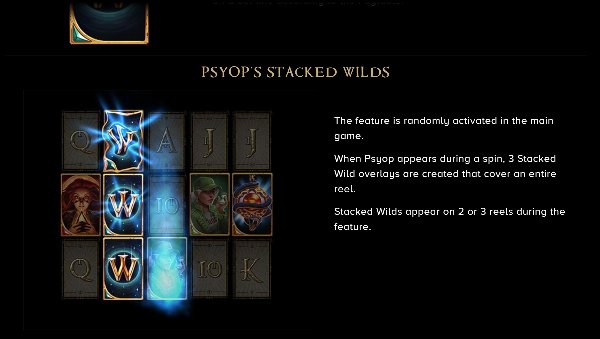 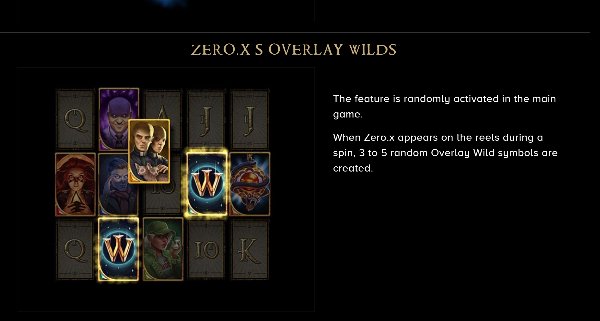 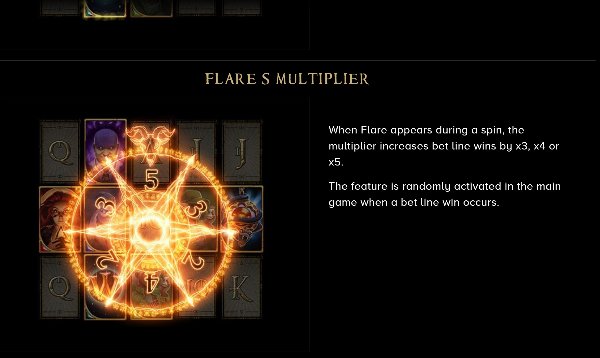 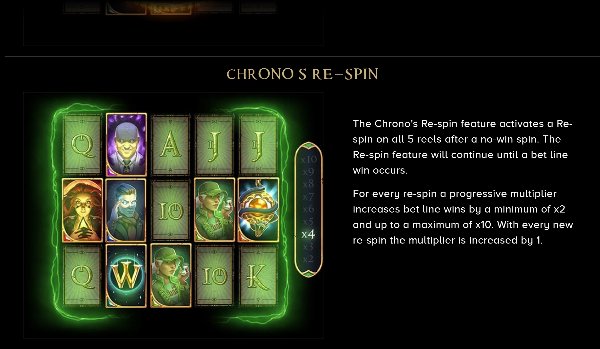 Arcane Reel Chaos uses 5 reels that are 3 symbols high with 20 paylines, playing from left to right.

Wild – The wild symbol will substitute for all symbols other than the Scatter symbol. The Wild symbol is available in the base game and during Free Spins.

Scatter – The Scatter symbol is the “Snake”, which will appear on reels 1,3 and 5, with 3 or more of them triggering the game’s Free Spins feature.

Psyop’s Stacked Wilds – This is a randomly activated feature. The “Psyop” symbol is the blue coloured character and will trigger the inclusion of 2 or 3 fully stacked Wild reels.

Zero.x Overlay Wilds – This is a randomly activated feature. When this happens between 3 and 5 Wilds will be added to the reels in random places. “Zero.x” is the two headed character.

Flare Multiplier – This is a randomly activated feature that will only trigger if you land a winning payline. When this happens any wins that you have landed will be multiplied by either 3, 4 or 5. “Flare” is the red coloured character.

Chrono Re-Spin – This is a randomly activated feature that will only trigger following an unsuccessful spin. The Re-Spins will continue until you land a winning payline. Each time you Re-Spin a multiplier will be applied. The multiplier is progressive, beginning at x2 the bet on the first Re-Spin and increasing by one on each re-spin up to a maximum of 10 times the bet.

Free Spins – During the Free Spins, the game’s 4 characters will do battle with their enemy “Deep Pockets”, in up to 4 different stages. Only character symbols are available during the Free Spins. Depending on the stage, “Deep Pockets” begins with a certain amount of health, beginning at 2 for stage one and rising to 6 for stage four. Each stage aso has a win multiplier that is equal in value to the stage. A win will decrease “Deep Pockets’” health bar by one. No win will decrease the hero’s health bar by 1, from a starting point of 6. If all the heroes lose their health in during a stage, the feature will end and decreasing “Deep Pocket’s” health to zero moves you onto the next level.

If you can defeat “Deep Pockets” on stage 4 then you will be awarded with 10 times the remaining health of your heroes.

You know you are in for something special the moment you click on the game and are given a description of each of the character before you even start to spin. This is a richly complex slots game that looks incredible. The characters are well-designed both in style and in terms of the features that come with them. Each one has their own unique random feature that is in some way reflective of their character. The Free Spins play out like the end of a computer game when you have to take on the big boss. The fact that it is played out over 4 levels, each one tougher than the last but also offering bigger and better rewards only makes me wish there was a pay to play option included. The house edge is excellent, offering real value for money, meaning there is simply nothing about this game that I can find to criticise.