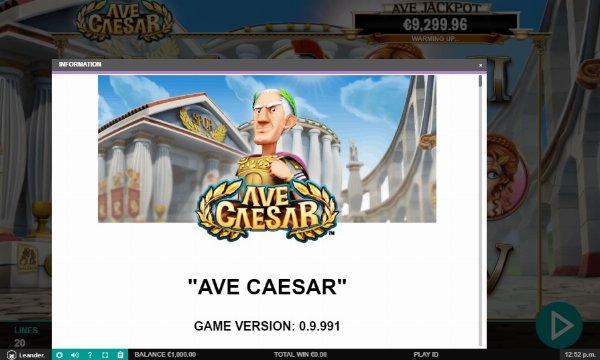 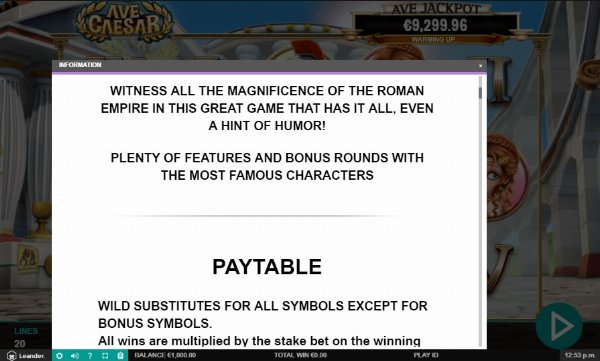 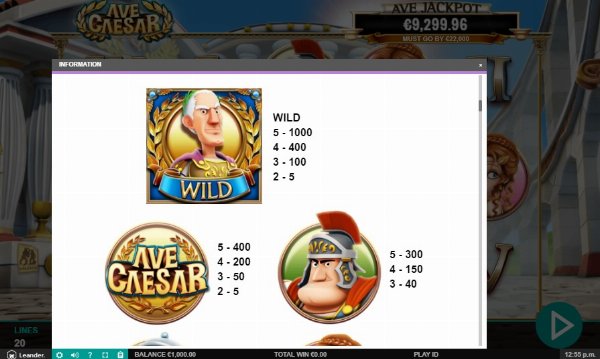 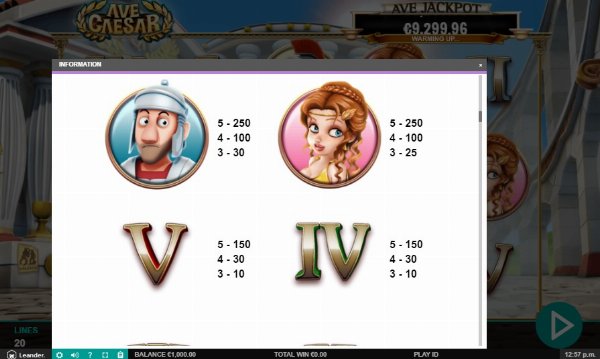 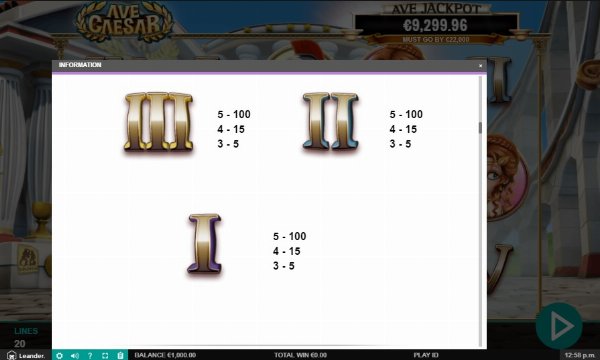 The Ave Caesar slots game was produced by the Leander slots design company and is leased out by casinos using many different primary casino platforms. Leander Gaming publish the House Edge information for their slots games within the game help files. The House Edge of Ave Caesar is 4.00%.

Do you hail to the Emperor of all the known world?

The Ave Caesar game has 5 reels, 20 paylines and you can bet one coin per payline.

The ‘Caesar’ symbol is Wild.

The second bonus feature is triggered randomly. When this happens a Gaul will appear on the screen. Rocks will then be thrown at the Gaul, if they miss the rocks will then be thrown at the reels. Each symbol that is hit by a rock is covered over. At the end of the feature all of the covered symbol will become the same randomly selected symbol from the paytable. A random multiplier may be awarded and applied to all winnings.

The third bonus feature is activated randomly. When this happens a Centurion will appear on the reels. If he calls the Legion, the legionaries will hit the top of the reels possibly causing a 2x2 or 3x3 banner to fall down covering a section of the reels with a randomly selected symbol. It is possible to receive two 2x2 banners.

- ‘Caesar and the Pretty Girl’ symbol on reel 5 – you are taken to a new screen showing Caesar arriving in the army camp. You are given the choice of 3 tents. If you select a tent with a pretty girl inside you win a prize and get to pick again from 3 new tents. You repeat this process until you select a tent that does not contain a pretty girl.

- ‘Dagger’ symbol on reel 5 – You are taken to a new screen showing a map of Europe. Select a new territory to conquer. Each battle awards prizes and if you conquer the territory you are awarded an extra prize, but they also reduce your truth. When you have no troops left the bonus feature ends.

The eighth bonus feature is triggered randomly. When this happens Caesar will appear and you will be asked to pick one of six scrolls. The scroll can award a cash win, a 5 of a Kind combination or any of the four bonus features described above.

Once your bonus feature has been selected Caesar will offer the opportunity to gamble your feature for a better one. If you choose to gamble and archer will shoot at a target and if he hits the target you will be awarded the feature you gambled to win. If he doesn’t hit you are awarded a consolation prize.

The final bonus feature is activated randomly and awards the progressive jackpot. This is guaranteed to be paid out before the jackpot total reaches €21430.

Ave Caesar sees Leander Gaming putting a strong and confident best foot forward. A very appealing graphical interface is combined with a dazzling array of bonus features and a progressive jackpot. The only slight negative is a House Edge that’s on the higher end of the range being released currently, but with so much on offer in the way of bonus features this game is worth every penny of the extra price.