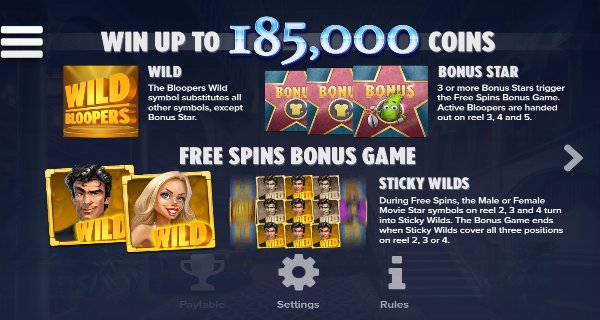 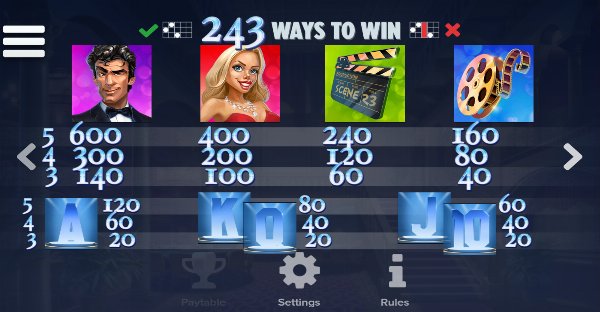 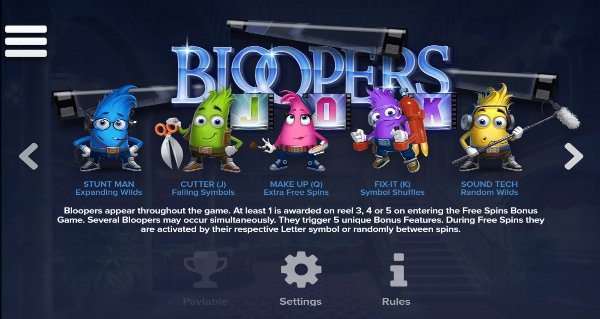 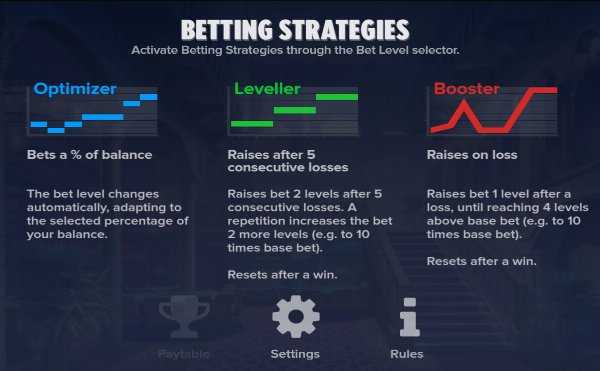 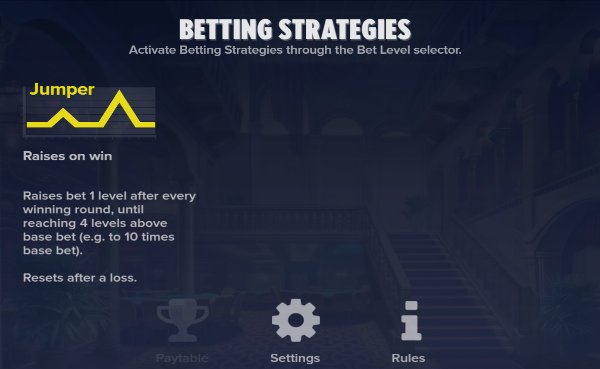 The Bloopers game can be found at casinos offering Elk Studios software. Elk Studios are a small but quickly growing casino software developer primarily focusing on the mobile market. At the present time they only offer slots games. Players should be aware that this software provider includes ‘betting strategies’ as an automated feature. These should be avoided. They offer no mathematical gain to the player and increase the risk of large losses in comparison to your bankroll. As a standard Elk Studios do publish the RTP/House Edge information for their slots games within their game paytable. As such we can say that the House Edge of Bloopers is 3.9%.

Bloopers is made up of 5 reels, each one 3 symbols high. There are no paylines, instead the game works using way lines, of which there are 243 in total.

Wild – The “Wild Bloopers” symbol substitutes for all symbols other than the “Hollywood Star”.

Bonus - The “Hollywood Star” is the Bonus symbol.

Bloopers – There are 5 different “Blooper” symbols all of which trigger their own unique bonus feature. However, only the yellow “Sound Tech” “Blooper” is available outside of the Bonus Game. Here is a breakdown of what each “Blooper” can do:

“Sound Tech” – This yellow “Blooper” appears randomly in the standard game and starts a re-spin after ensuring all Wilds are sticky.

“Fix It” – The purple “Blooper” riding the jet bike will trigger his bonus when you reveal a “K” symbol during the Bonus Game. He will shuffle the symbols on the reels around to increase your chances of landing way wins.

“Make Up” – The pink “Blooper” will trigger her bonus when you reveal a “Q” symbol during the Bonus Game. She will extend the bonus game by removing a sticky “Movie Star” symbol.

“Cutter” – The green “Blooper” will trigger his bonus when you reveal a “J” symbols during the Bonus Game. He will cut the reels and release falling symbols, giving you another chance to win.

“Stunt Man” – The blue “Blooper” will trigger his bonus at random. When this does happen he will set off expanding Wilds on any reel.

“Bloopers” is a fun looking game with some quirky little characters that look will look familiar to anyone who has seen the “Despicable Me” films. Whilst our “Bloopers” might look a little on the “Miniony” side, there’s no getting away from the fact that they are entertaining little critters. Each bonus comes with its own unique animation sequence where reels are ripped up or spun around, which helps to bring the bonus to life and lets you immerse yourself in the crazy world of the “Bloopers” for a little while. However, there is an issue here and it’s the same one that comes will all Elk Studio games. The “Advanced Betting Strategies” are sold as an advantageous game feature, when these strategies offer the player no improvement over flat betting. The reality is that if you increase your bet, you’re more likely to lose money than you are to make any. This is poor practice, and it drags everything positive about the game down. We would be highly critical of any website offering bogus betting strategies so a game developer doing this is even more problematic for us. If this was not a feature in the game I would be scoring this game much higher than I have done.