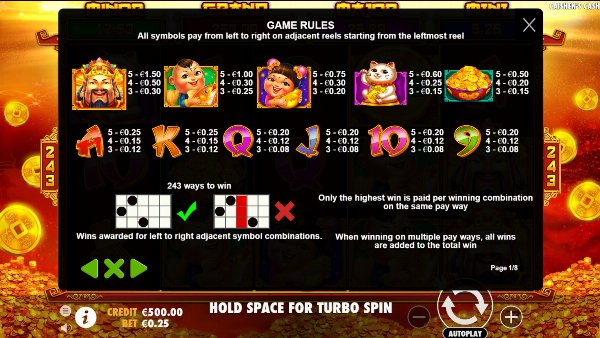 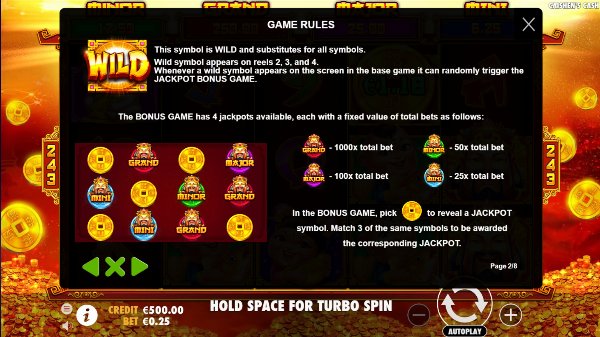 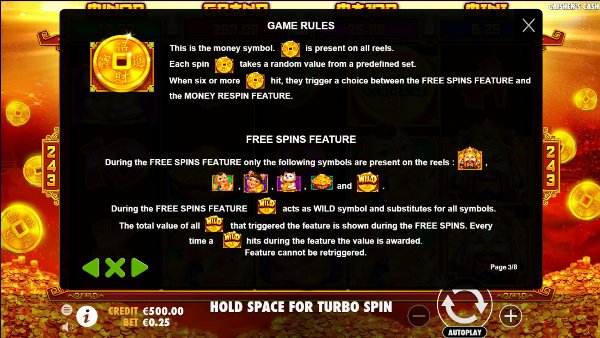 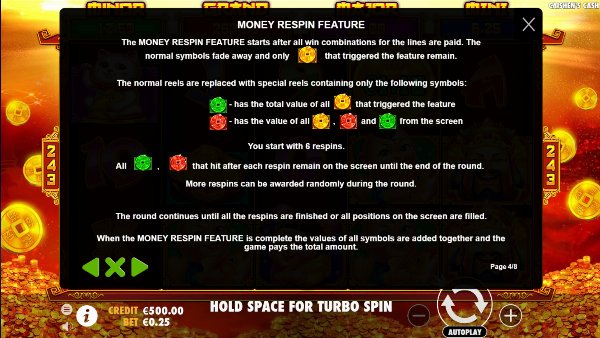 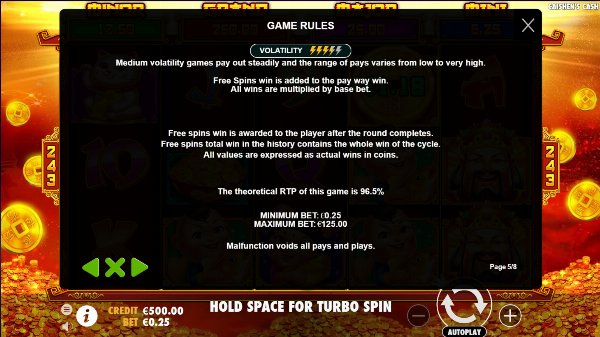 The Caishen’s Cash slot game can be found at casinos offering Pragmatic Play software. Pragmatic Play are one of the newer slots game developers on the market but their products are polished and professional in feel and operation. As a standard Pragmatic Play do publish the RTP/House Edge information for their slots games within their game help file. For a provider that are not currently licensed within the UK market and therefore are under no obligation to publish these figures this is a significantly progressive move. The House Edge for Caishen’s Cash is 3.5%.

Caishen’s Cash is a 5 reel game that is 3 symbols high. Instead of using paylines, you form winning combinations, involving 3 matching symbols across adjacent reels, starting from the left-most reel. There are 243 combinations in total.

Wild – The Wild symbol will substitute for all symbols and is only available on reels 2, 3 and 4. Whenever a Wild symbol appears in the base game it can randomly trigger the jackpot bonus game.

Money Symbol – The “Money Symbol” is a gold coin with a hole in the middle. With each spin the “Money Symbol” will take on a random value from a predefined set. When 6 or more of them hit the reels you will trigger a choice between the Money Respin feature and the Free Spins feature.

Free Spins – During the Free Spins feature only the high paying symbols will be present on the reels. “Money Symbols” will also be present but in this feature they become wild and take on the value that they were given when they triggered the feature. They act as a normal Wild, substituting for all symbols. Free Spins cannot be re-triggered.

Caishen “is the Chinese god of prosperity worshipped in the Chinese folk religion and Taoism” (thankyou Wikipedia). In this game you can earn that wealth if you can land as many of the “Money Symbols” as possible. The game is a simple enough looking one, but if you are familiar with Pragmatic Play’s output then you will recognised the style and the colours almost instantly. Whilst there is nothing much here to write home about, in terms of the game’s aesthetic, there are some fun bonuses that make the experience a lot better than your usual Chinese themed game. The Free Spins and Re-spins all come with a little something extra and the random bonus is also a nice addition. The house edge is also bang on what we would consider to be good value for money, meaning that this is a game we would recommend you check out.