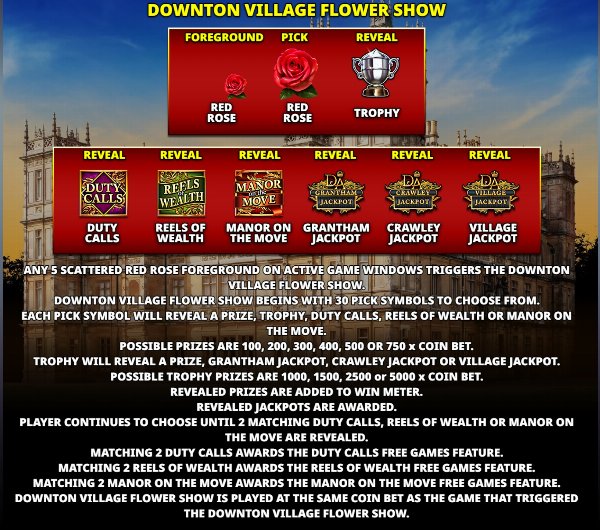 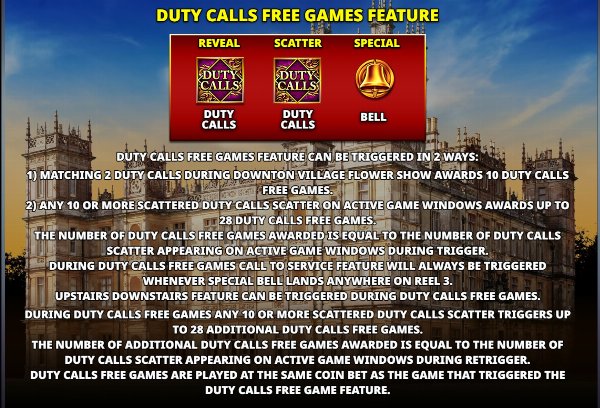 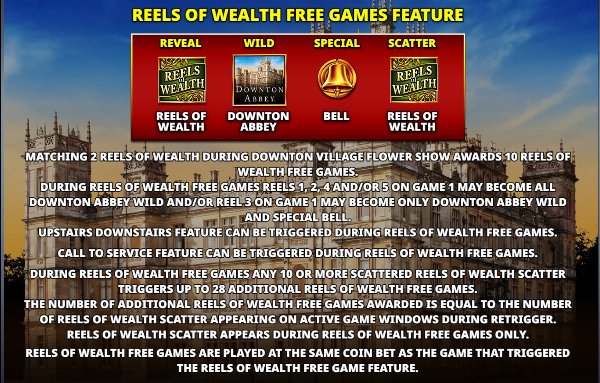 The Downton Abbey slot can be found at casinos offering software provided by the Skywind Group.Skywind are a well-established casino software provider having been formed in 2012 and supplying their games to many of the biggest names in the industry. Like many of the smaller casino software providers Skywind have focused their development efforts solely on slots games and have not released any table games. Skywind do not provide the RTP information for each slot on their website, which means that until their software is available to play in UK casinos it is not possible for us to provide that information. This is the case for the Downton Abbey slot and as such we can inform you that its house edge is sitting at 4%.

The Downton Abbey slot is played over 2 separate grids. Grid 1 is always in play and 40 paylines playing from left to right. Grid 2 needs to be triggered before it is in play and when it is allows you to form symbol combinations of 3 or more across adjacent paylines, playing from left to right. Grid 1 is always active, even when grid 2 is triggered. Both grids have 5 reels and are 3 symbols high.

Special Bell – The “Bell” is the symbol that triggers the slot’s second grid. When it lands on the top symbol space on the middle reel, a bell will ring and the two grids will become active, giving you two chances to win instead of just the one. Additionally, if the “Bell” symbol lands on reel 3, outside of the top symbol space then the “Call to Service” feature will be trigger (I will describe this in more detail in the features section). The Special Bell symbol is also Wild, substituting for all paying symbols.

Wild – The “Downton Abbey” symbol is Wild. It will substitute for all paying symbols and if the 2nd grid is active any Wild symbols that land in the main grid will be duplicated in the corresponding positions on the 2nd grid.

Flowers – If you can land 5 or more of the “Flower” symbols across both reels then you will trigger the “Flower Show” feature.

DA Wild – This Wild is only available on the 2nd grid and will substitute for all paying symbols.

Flower Show Feature – If you trigger the “Flower Show” feature you take part in a click and match bonus where you can either trigger a set of Free Spins or win an instant prize. There are also 3 Jackpots available: The “Grantham”, the “Crawley” and the “Village” jackpot. You can win anything from 100 to 5000 times the coin bet depending on what instant win or jackpot you manage to reveal. You can win multiple instant prizes and multiple jackpots as the feature only ends once you have triggered one of the following Free Spins features:

Duty Calls Free Spins – These Free Spins can be trigger via the main game and the “Flower Show” feature. However, matching during the “Flower Show” feature will only gain you 10 Free Spins, whilst triggering in the main game can win you up to 28 Free Spins. During the feature the “Call to Service” feature will always trigger when you land a Bell symbol anywhere on reel 3. The feature can also be re-triggered in the same way that it was triggered in the first place.

Reels of Wealth Free Spins – This feature can only be trigger via the “Flower Show” feature and will award you with 10 Free Spins if you do. During the feature there is chance that reels 1, 2, 4 and 5 can become fully stacked with Wild symbols on the main grid. The 3rd reel can become only Wild symbols but with the special Bell symbol too, which will trigger the 2nd grid to become active no matter where it lands on the 3rd reel. “Reels of Wealth” symbols are active which means the feature can be re-triggered if you can land 10 or more of them on the reels at once. You can re-trigger up to 28 additional spins.

Manor on the Move Free Spins - This feature can only be trigger via the “Flower Show” feature and will award you with 10 Free Spins if you do. Any “Downton Abbey Wild” symbols that land on the reels during the Manon on the Move Free Spins will stick in pace and move around the reels into random positions after each new spin. The roaming Wilds cannot land in spaces that contain other Wilds. “Manor on the Move” symbols are active which means the feature can be re-triggered if you can land 10 or more of them on the reels at once. You can re-trigger up to 28 additional spins. The “Upstairs Downstairs” and the “Call to Service” feature can both be triggered during the feature.

Like the TV show that this slot is based on, there is an awful lot going on here. You have two grids, separating the workers from the aristocrats. There are 3 Wild symbols, a bonus round, 3 sets of Free Spins, 1 of which can be triggered in 2 different ways. Add to this a progressive jackpot and features within features and my head is positively spinning trying to lock itself around this slot. It is hard not to be impressed by the thought that has gone into bringing Downton Abbey to the reels and as such we would recommend it.