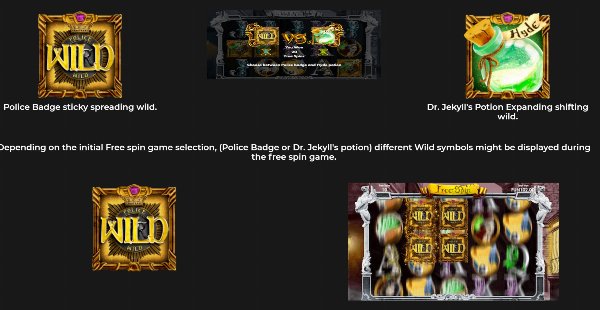 The Dr Jekyll & Mr Hyde slot game can be found at casinos offering Iron Dog software. Iron Dog are one of the smaller software providers currently on the market, but the appear to be a subsidiary of the far larger and better established 1x2Gaming. They do not offer a full casino platform, but primarily seem to be used as a bolt on package for extra slots games. Iron Dog do publish the Return to Player (RTP)/House Edge information for their slots games within the game paytable. As such we know that the house edge for Dr Jekyll & Mr Hyde is 4.4%.

The Dr Jekyll & Mr Hyde consists of 5 reels, 3 symbols high. The game uses traditional paylines, with 30 in total, playing from left to right.

Theme – The slot is based on the classic 19th century novel, which as I’m sure you can imagine means that it comes with plenty of potions and symbols that express the duality of the character.

Wild – The Wild symbol is the “Experiment”, which will substitute for all symbols other than Free Spins. If a Wild symbol lands on the top of the reels it will expand to fill them.

Scatter – The scatter symbol is the split symbol, made up of half a potion and half a police badge. When 3 or more of them land on the reels at once you will trigger the Free Spins feature.

3, 4 or 5 scatter symbols will award 30, 40 or 50 Free Spins respectively. Before the feature begins you need to choose which of the 2 different Wild symbols you want to appear.

The “Potion” is an expanding shifting Wild and can only appear on reels 2, 3 and 4. When it lands it will appear on the top of the reel and will expand to fill it. It will remain on the reels, moving one space to the left with each spin before it leaves the reels to the left.

This is a fairly simple slot from Iron Dog but is, yet again, a step in the right direction, in terms of their design. Looking better and better with each release the Dr Jekyll and Mr Hyde slot suggests that Iron Dog are looking to muscle their way into the top tier of slot developers. You get Wilds which expand and you get Free Spins. Your Free Spins come with 2 different Wild options, which you choose from before the feature begins. The house edge is higher than we like to see, taking some of the shine off of this one.