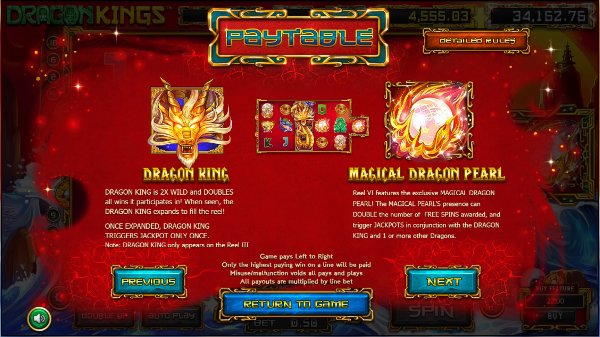 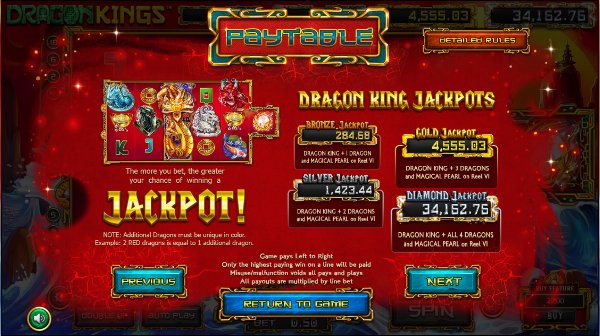 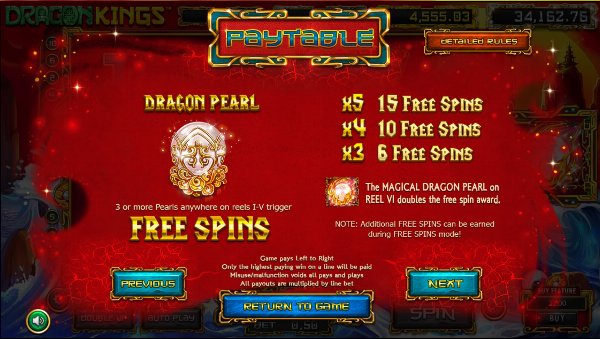 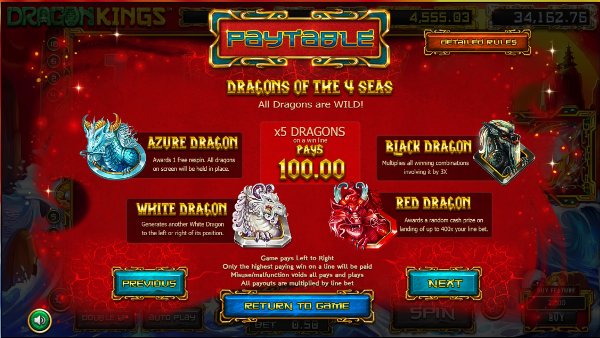 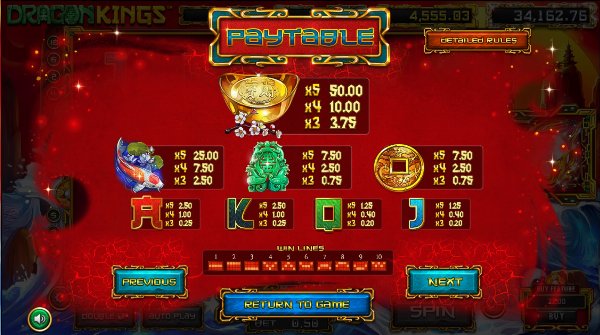 The Dragon Kings slots game is produced by BetSoft. BetSoft are one of the smaller slot development companies on the market at the moment and have recently started offering their own casino platform. The company was founded in 2006, entering the slots market 4 years later. Betsoft do publish the Return to Player (RTP)/House Edge information for their slots games within the game help files. As such we know that the house edge for Dragon Kings is 4.80%.

The Dragon Kings game has 5 reels and each reel is 3 symbols high. The game uses traditional paylines, 10 in total, playing from left to right.

Wild – All “Dragon” symbols are wild, substituting for all symbols other than Free Spins. Revealing 5 dragons on the reels will win you a prize of 100 coins. Each dragon symbol offers something different:

Gold Dragon King – The “Gold Dragon King” symbol appears on reel 3 and when it does it will expand to fill the reel. It also doubles all wins that it forms paylines with.

Red Dragon – The “Red Dragon” will award an instant cash prize of up to 400x the bet.

Black Dragon – The “Black Dragon” will multiply all winning combinations that it is involved with by x3.

Azure Dragon – The “Azure Dragon” will award a re-spin, during which all Dragon symbol are held in place.

Free Spins –The “Dragon Pearl” symbol is the game’s Free Spins symbol, triggering the feature when you reveal 3 of them anywhere on the reels.

Magical Dragon Pearl – To the right of the reels there is a space for an extra symbol. The only symbol that can appear in it is a “Magical Dragon Pearl” symbol. If you land one at the same time as you trigger free spins, the number of free spins awarded will be doubled. If you land one with the “Dragon King” symbol and any other dragon symbol then you will trigger the game’s jackpot.

Double Up – After any win you can risk what you have earned by pressing the Double Up button. You bet 50% of your winnings and will win based on the toss of a coin. You can attempt to double up as often as you like.

Buy Feature – You can skip straight to the Free Spins feature and be awarded 10 free spins if you are willing to spend cash on the “Buy Feature”. The amount you will have to spend is displayed on the button.

Dragon Kings is operating a theme that you will have seen countless numbers of times before if you are a seasoned slots player. I always believe that if a dragon themed game is up for review I’m more likely to judge it harshly than others because I see so many of them. So when I saw Dragon Kings, I have to admit that I wasn’t expecting much. However, the designers have clearly worked very hard to make the game look good, which already puts Dragon Kings a little ahead of most other dragon themed games. I like how every dragon offers something different, that tells me that some time has been spent thinking about how to make the game engaging. The additional symbol to the far-right of the reels is a nice touch. Those two elements alone are enough for this game to stand out from the crowd. You need to be careful with the Double Up and the Buy Now options, as they both involve taking more risks. The one element of the game that has left me disappointed is the higher than average house edge. At 4.5% the game is not offering enough value to make this more than just a good offering.