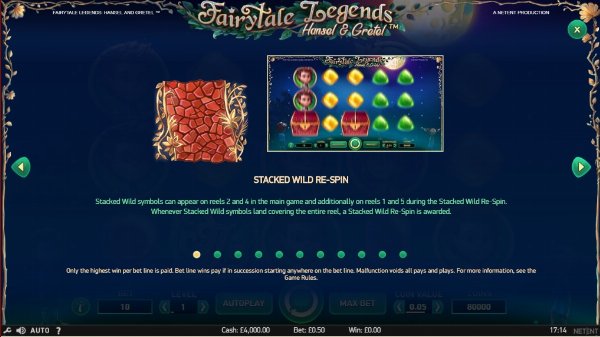 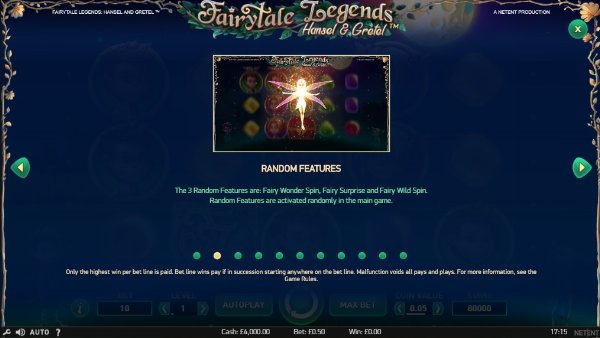 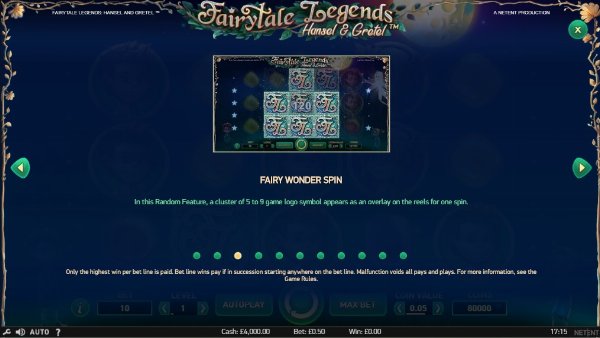 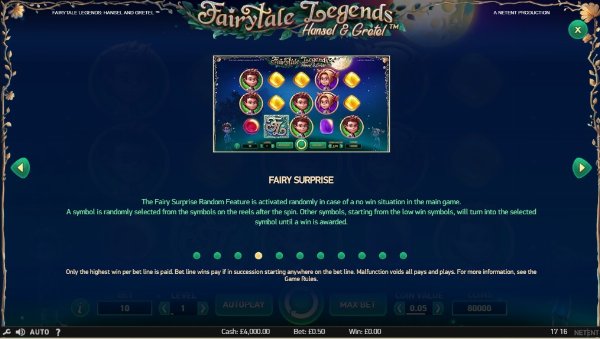 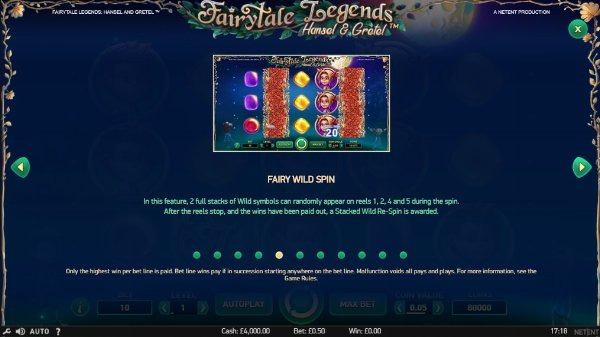 Will greed lead you to the oven door?

Fairytale Legends – Hansel and Gretel is a 5 reel game, with 10 paylines and you can bet up to 10 coins on each payline.

The ‘Forest Path’ symbol is Wild, only appears on reels 2 and 4 and is stacked on both reels.

The second bonus feature is activated randomly at the end of any spin and adds a cluster of 9 ‘Fairytale Legends Logo’ symbols is added to the reels over the top of the existing symbols.

The third bonus feature is activated randomly at the end of a non-winning spin. When this happens one symbol showing on the reels is randomly selected. Starting with the lowest paying symbols on the reels, symbols are changed one at a time into the selected symbol. This continues until a win is created.

The fourth bonus feature is activated randomly and when this happens 2 stacks of Forest Path Wild symbols are randomly added to reels 1, 2, 4 or 5. At the end of this spin once any wins have been paid the reels are respun as with the first bonus feature.

The fifth, sixth and seventh bonus feature are all activated the same way when you receive the ‘Chest’ bonus symbol anywhere on reels 1, 3 and 5. When this happens one of 3 possible bonus features are activated.

The fifth feature takes you to a new screen showing 15 candies. Select 3 of the candies. Each candy hides a multiplier. Once you have selected 3 you can choose whether to select one of the 3 to win that multiplier or receive the average of the 3 multipliers. Only after this second choice are the multipliers revealed.

The seventh feature awards you a cash prize of 15x your current bet.

Fairytale Legends - Hansel and Gretel is something pretty special. Beautiful graphics, an engaging soundtrack, varied and plentiful bonus features and a pleasantly low House Edge all come together to make a game that’s well worth playing.