Finn and the Swirly Spins 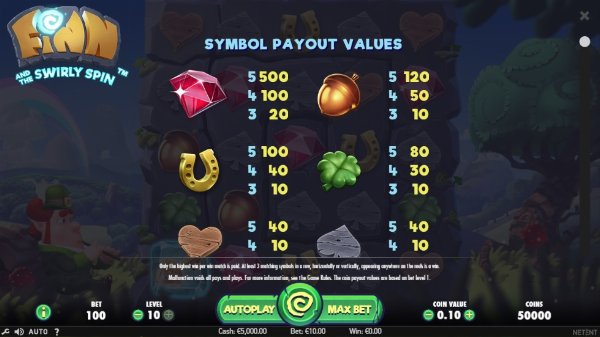 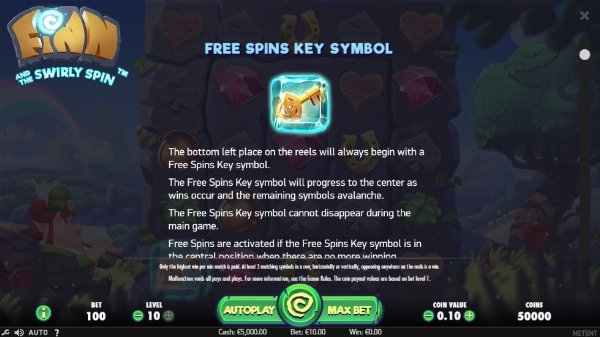 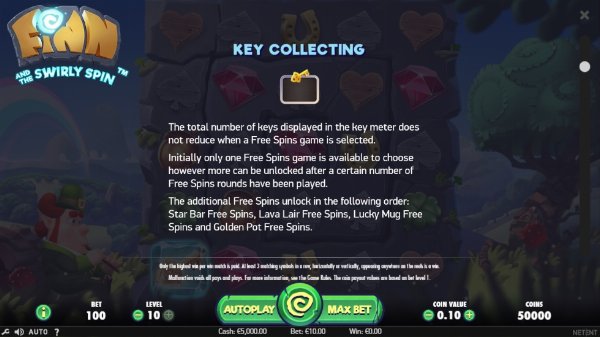 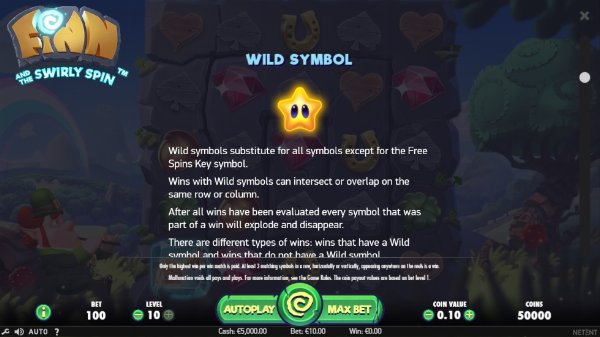 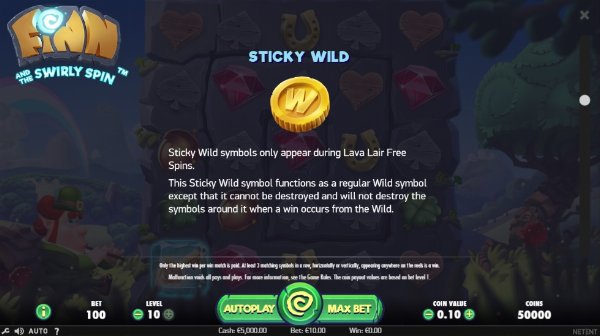 The luck of the Irish may throw you a curve ball with this one!

Finn and the Swirly Spins is a non-standard slots game. Instead of traditional reels, Finn and the Swirly Spins uses one single reel that spirals in around a 5x5 symbol grid. Regardless of the spiral layout of the reels, 3 or more matching symbols either vertically or horizontally adjacent constitutes a win. When symbols result in a win the involved symbols will pop after you’ve been paid and this will leave behind a ‘Star’ Wild symbol and allow all the other symbols on the spiral to move round to fill the gaps with new symbols coming in to fill the spaces at the bottom left of the reels. The process then repeats if new winning combinations are formed. If a Star Wild symbol is involved in a win the symbols directly adjacent to the Star Wild symbol both horizontally and vertically pop as well even if they are not part of the winning combination. When a Star Wild symbol pops no new Star Wild symbol is left behind.

There are five bonus features when playing Finn and the Swirly Spins. The first bonus feature is active on every spin. At the beginning of each spin a ‘Key’ symbol starts at the bottom left position on the reels. As winning combinations of symbols are removed from the reels the Key symbol will then move round the reel towards the centre position. If the Key symbol reaches the centre position it unlocks the reels and triggers the free spins feature. Each time you trigger the free spins feature the Key symbol is banked at the bottom right of the reels. Triggering the free spin feature multiple times allows you to select different free spin variants as follows:

- First three trigger – Star Bar Free Spins – You are awarded 7 free spins with the Starfall Wilds feature active on every spin as described below.

- Four or more triggers – Lava Lair Free Spins – You are awarded 3 free spins with the Dragon Destroy feature active on every spin as described below. During the Lava Lair Free spins the Key symbol is replaced with a ‘Gold Coin’ Wild symbol that will remain locked in place and does not get removed from the reels when it contributes to a win.

- Nine or more triggers – Lucky Mugs Free Spins – You are awarded 4 free spins with the Irish Luck feature active on every spin as described below.

- Sixteen or more triggers – Golden Pot Free Spins – You are awarded 2 free spins with the Magical Transform feature active on every spin as described below.

The second bonus feature is triggered randomly. When this happens 2 or more Star Wild symbols are added to random positions on the reel but cannot replace the Key symbols. If this does not result in a winning combination another Star Wild symbol will be added to a random position on the reels. This process is repeated until a win is generated. This is called the ‘Starfall Wilds’ feature.

The third bonus feature is activated randomly at the end of a non-winning spins. When this happens a dragon will appear and destroy a random number of symbols on the reels, allowing all the remaining symbols to move round and new wins to be created. This feature guarantees at least one winning combination. This is called the ‘Dragon Destroy’ feature.

The fourth bonus feature is triggered randomly at the end of a non-winning spin. When this happens a randomly selected horizontal or vertical line will be replaced with a randomly selected symbol from the paytable creating a winning combination. The added symbol will not be the Star Wild symbol and the replaced line cannot contain the Key symbol. This is called the ‘Irish Luck’ feature.

Finn and the Swirly Spins is another great example of Net Entertainment’s creativity. The game is graphically gorgeous and offers a significant selection of bonus features that add new twists to old features making them interesting and fresh again. They combine this with a House Edge that’s certainly within the attractive range to result in a game that’s great value for money alongside very entertaining. There’s nothing not to like about this game.