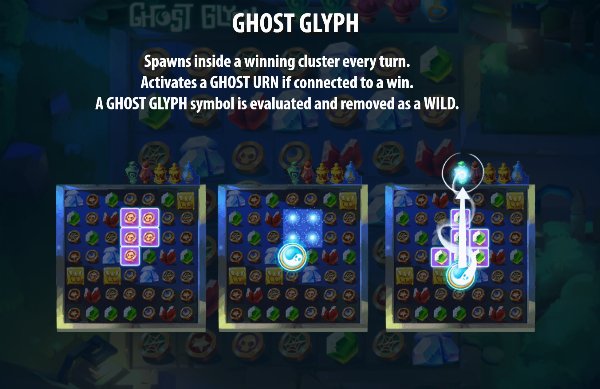 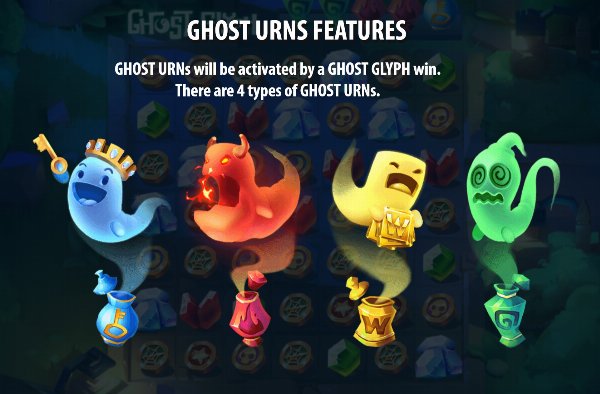 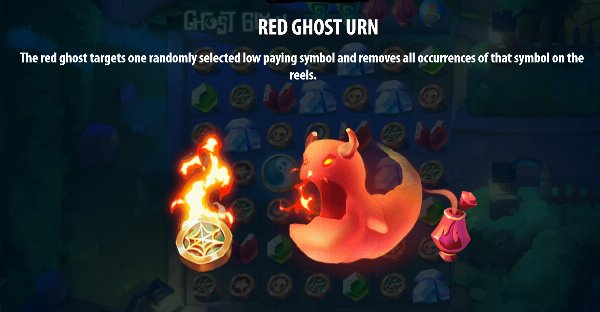 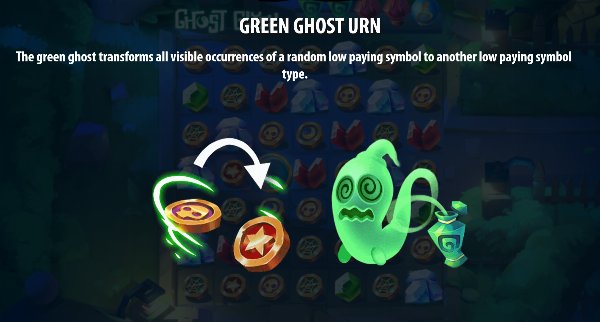 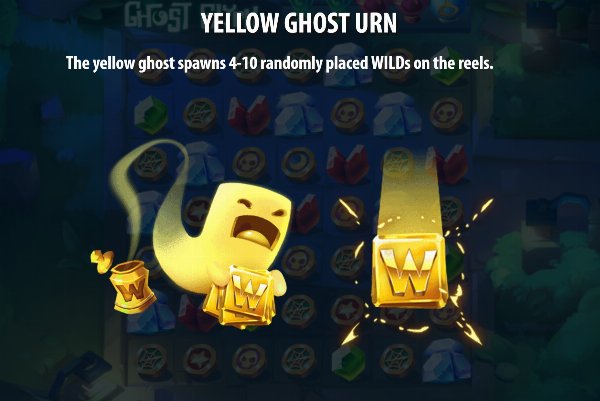 The Ghost Glyph slots game can be found at casinos offering Quickspin software. Quickspin are one of the newer slots game developers on the market but their products are polished and professional in feel and operation. As a standard Quickspin do publish the RTP/House Edge information for their slots games within their game help file. For a provider that are not currently licensed within the UK market and therefore are under no obligation to publish these figures this is a significantly progressive move. The House Edge of Ghost Glyph is 3.82%.

Ghost Glyph is a 7 reel game that is 7 symbols high. There are no paylines in this slot. Instead, form combinations with clusters of 5 symbols or more and every time you land a winning cluster the symbols involved will disappear and new symbols will drop down in their place, giving you another chance to win. This process will continue until you fail to land a winning combination.

Wild – The Wild symbol is a Gold W, which will substitute for all paying symbols.

If you trigger a tumble a Ghost Glyph will be added to the reels and there is a random chance that one of the Coloured Urn features will trigger. At the beginning of each spin 5 Ghost Urns are randomly determined with the final Ghost Urn always being the Blue Ghost Urn. The first Ghost Urn will always be either the Green, Yellow or the Red Urn.

Yellow Ghost Urn – A yellow ghost is summoned and spawns 4 - 10 randomly placed Wilds on the reels, followed by a win evaluation.

Green Ghost Urn – A green ghost is summoned to transform all visible occurrences of a randomly chosen low type symbol in the game area into another low type symbol, followed by a win evaluation.

Red Ghost Urn – A red ghost is summoned to remove all visible occurrences of a randomly chosen low type symbol in the game area, followed by a tumble and win evaluation.

Blue Ghost Urn - A blue ghost is summoned to unlock the Bonus Game, which is awarded after the completion of all tumbling in the base game. 8 free spins are awarded when the Blue Ghost Urn is activated in base game. 3 additional free spins are awarded each time the Blue Ghost Urn is activated in the Bonus Game. Every tumble sequence increases the gauge of meter. 8 tumbles fill up the gauge of the meter. A full meter levels up the Massive Wild feature and resets the meter gauge.

Massive Wild Feature – This feature is triggered on the last spin of the Free Spins if the Meter has reached, at least, level 1. If the meter fails to reach level 3 then massive Wilds are removed as part of a win. If it reaches level 3 or higher then the Massive Wild will move to a random position following each spin.

Ghost Glyph is a stunning looking slot comes our way just in time for Halloween. It plays over a large grid and you for clusters that trigger tumbles that trigger additional potential for wins. You get various different features within all this but they all come as part of a progressive feature that triggers at random. This is all about piling wins on top of each other, which is obviously very exciting if you can pull it off, but also not something you are likely to see very often. The house edge is offering decent value for money, making this a Halloween slot worth checking out.