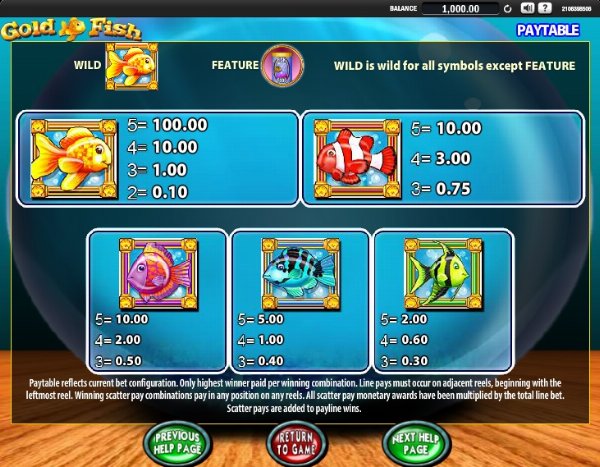 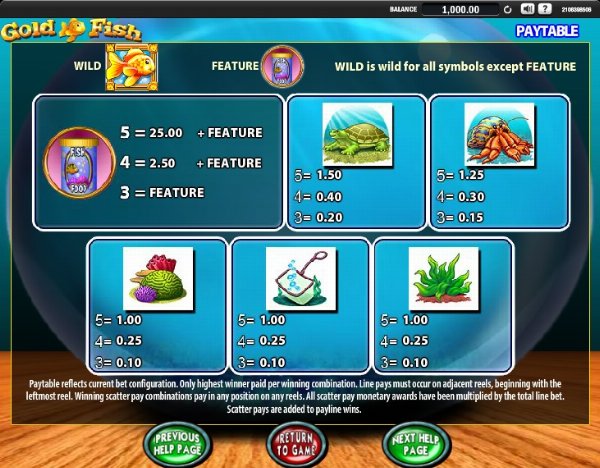 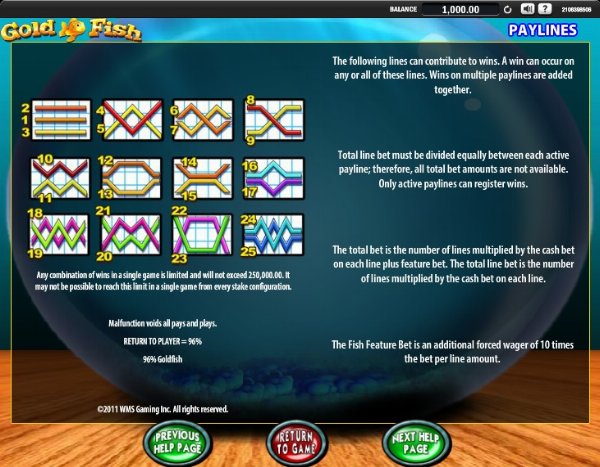 The Gold Fish slots game can be found at online casinos offering WMS Gaming software who are a wholly owned subsidiary of Scientific Gaming. WMS Gaming do not publish their RTP or House Edge figures as standard. However UKGC licensed operators who now publish all game figures as standard. As such we can say that the House Edge of Gold Fish is 4.00%. As this figure has not been confirmed by the software provider we cannot confirm whether this game is configurable or not. As such this figure should be treated as a guideline only when playing at any operator that does not publish their RTP figures.

Do you have the memory of a Gold Fish?

Gold Fish is a 5 reel game with 25 paylines.

The ‘Gold Fish’ symbol is Wild.

There are two bonus features when playing Gold Fish. The first bonus features is triggered when you receive three or more of the ‘Fish Food’ scatter symbol anywhere on the reels. When this happens you’ll be taken to a new screen showing 25 cans of fish food. Select the cans one at a time to reveal to reveal fish and turtle symbols. Matching 3 or more of one type of fish will win you a cash prize. When you’ve revealed 3 turtle symbols you will be shown 3 turtles and asked to select one to reveal a final prize.

The second bonus feature is triggered randomly after any spin. When this happens a fish bowl will appear over the reels. One of 5 fish will jump into the bowl with the following results:

- Gold Fish – Select one of five bubbles to be awarded 5, 8, 10, 15 or 20 complimentary spins with a multiplier of 2, 3, 5, 7 or 10. Complimentary spins cannot be retriggered. Any non-winning spin is awarded a consolation prize of 2xbet.

- Purple Fish – The purple fish will blow 3 bubbles. The bubbles will pop to reveal digits between 0 and 9. The digits will be arranged into a multiplier between 15 and 984 that will be applied to your bet.

- Red Fish – Pick a Clam, Treasure Chest or Castle bubble to win a prize. Fish will then kiss your prize. Each time a fish kisses your prize the prize is increased.

- Green Fish – Select a bubble to win a multiplier which will be applied to your bet or a ‘Award All’ to win all prizes.

- Blue Fish – You are awarded 1 to 3 ‘Super Scatter’ spins. During the spins all symbols pay like scatter symbols. Any non-winning spin is awarded a consolation prize of 10xbet.

Gold Fish has a good range of bonus features paired with a House Edge that’s attractive. All in all a very good game.