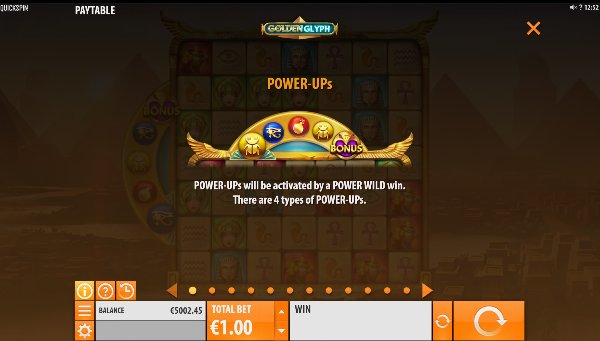 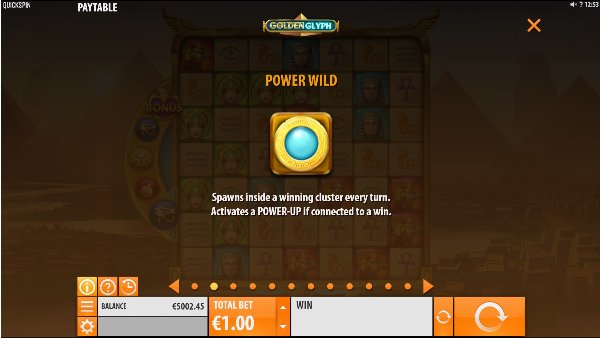 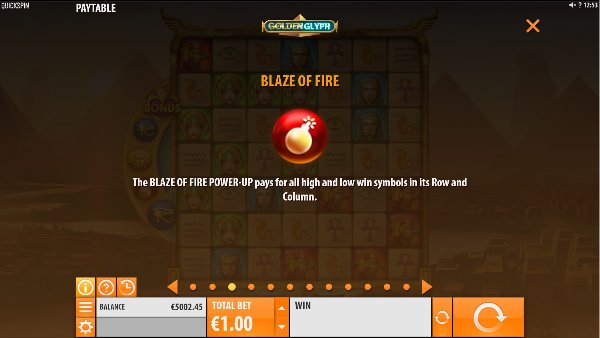 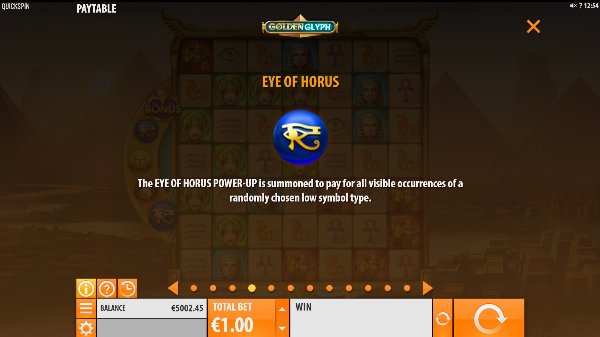 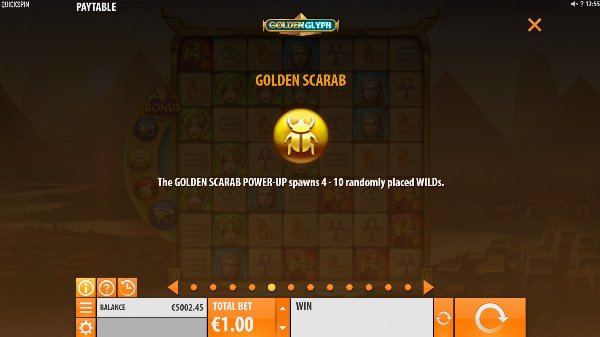 The Golden Glyph slots game can be found at casinos offering Quickspin software. Quickspin are one of the newer slots game developers on the market but their products are polished and professional in feel and operation. As a standard Quickspin do publish the RTP/House Edge information for their slots games within their game help file. For a provider that are not currently licensed within the UK market and therefore are under no obligation to publish these figures this is a significantly progressive move. The House Edge of Golden Glyph is 3.81%.

Golden Glyph is a 7 reel game that is 7 symbols high. There are no paylines in this slot. Instead, form combinations with clusters of 5 symbols or more and every time you land a winning cluster the symbols involved will disappear and new symbols will drop down in their place, giving you another chance to win. This process will continue until you fail to land a winning combination.

Power Wild – The Power Wild is a blue circle surrounded by gold. One will appear on the reels every time you land a winning combination and will then fall down into a space that a previous symbols used to occupy. If you manage to land a win after the tumble that includes the Power Wild then you will trigger one of the Power Ups that are displayed on the side of the reels.

Wild – The Wild symbol is a Gold W, which will substitute for all symbols other than Power Wilds and Golden Glyph Wilds.

Golden Glyph Wild – The Golden Glyph Wild is only available during the Free Spins feature. It is essentially the same as a standard Wild except it comes with a multiplier. If the Wild is involved in a win then the multiplier will increase with each tumble. The Wild will move to a different location with each spin.

Blaze of Fire – This Power Up is represented by the “Bomb” symbol on the Power Up reel. If you trigger it then it will pay for all High and Low winning symbols in the row and the column it lands in. Those symbols will then all disappear and new symbols will be added, giving you another chance to win.

Eye of Horus – This Power Up is represented by the “Eye of Horus” symbol on the Power Up reel. If you trigger it then it will pay for every occurrence of a randomly chosen low paying symbol across the entire grid.

Golden Scarab – This Power Up is represented by the “Golden Scarab” symbol on the Power Up reel. If it triggers then between 4-10 Wild symbols will be randomly added to the reels.

Free Spins – This Power Up is represented by the “Bonus” symbol on the Power Up reel. If you land it you will be awarded 9 Free Spins. If you trigger the Bonus again during the Free Spins feature you will be granted an additional 3 Free Spins.

Golden Glyph is a stunning looking slot that will meet the needs of any player looking for something that offers you a different gaming experience. Tumbles are always fun, but add to that the chance to trigger a bonus with each one and then add to that the heightened potential for further bonuses with each tumble and you have a slot that is seriously good fun. If you like traditional slots then this is not for you but if you want something that feels as if it is ticking over with every spin then this is the slot for you. It has a decent house edge too, meaning there is little here to criticise.