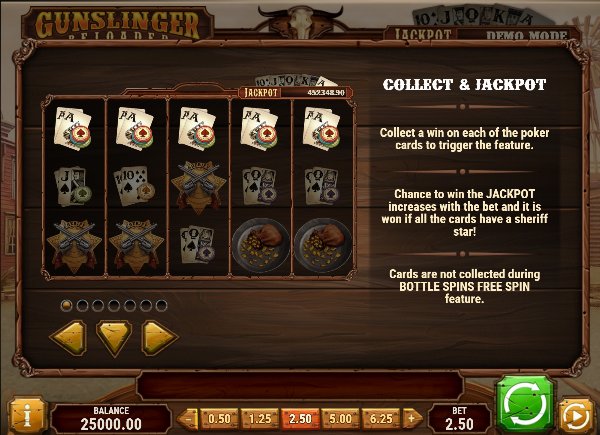 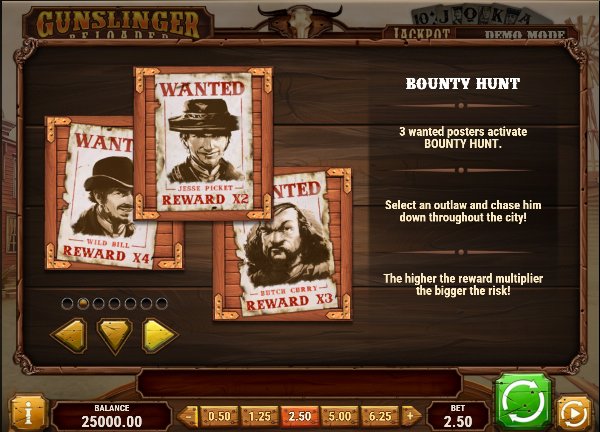 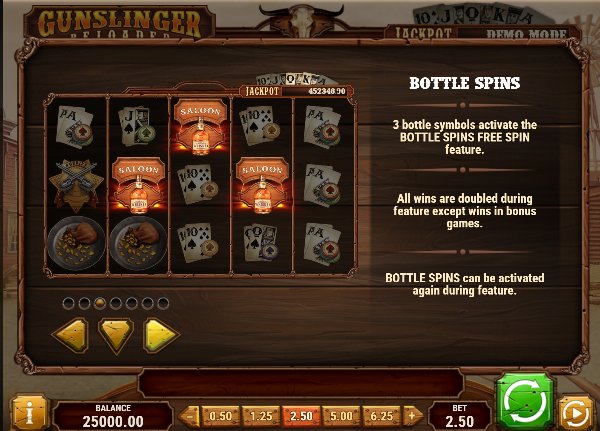 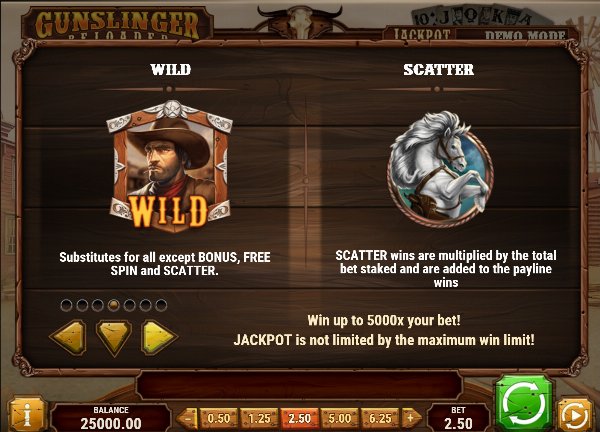 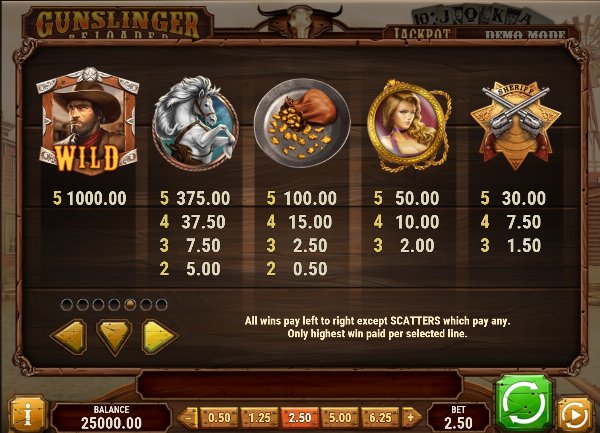 The Gunslinger Reloaded game can be found at casinos offering Play ‘n Go software. Play ‘n Go are a growing provider in the industry and have a rapidly expanding portfolio of both slots games and clients. They do offer a full casino platform, but primarily seem to be used as a bolt on package for extra slots games. Play ‘n Go do publish the Return to Player (RTP)/House Edge information for their slots games within the game help files. As such we know that the house edge for Gunslinger Reloaded is 4%.

The Gunslinger game is made up of 5 reels, each one 3 symbols high. There are 25 paylines, playing from left to right, excluding Scatters.

Wild – The Wild symbol is the “Gunslinger”, substituting for all symbols other than Bonus, Scatter and Free Spin symbols. A combination of 5 Wild “Gun Slinger” symbols is worth up to 1000.00 times the bet.

Bonus – The Bonus symbol is the “Wanted Poster”.

Free Spins – The Free Spins symbol is the “Whiskey Bottle”.

Free Spins - You trigger Free Spins in this game if you can reveal 3 or more of the “Whiskey Bottle” symbols in a single spin. When this happens, the bottles raise themselves out from the reels and you get to test your gunslinging skills by choosing one of them to shoot. The smashed bottle will then reveal a random number of free spins. All wins are doubled and you have the chance to re-trigger free spins during the feature.

Bonus - The game’s main bonus is triggered when you collect three of the “Wanted Poster” symbols. As the bonus is triggered the 3 symbols will float from the reels and appear on a new screen. You then get to choose the bandit that you want to hunt down. The screen will shift and you’ll be standing at one end of a street in a town straight out of an old Western. You walk down the street shooting barrels and winning coins as you do so. When you get to the end of the street your chosen bandit will walk out of the saloon and face you. You have to choose which of the three moves you think the bandit will use during your shoot out. Guess correctly and you shoot him dead, winning a large number of coins in the process. Get it wrong and your screen will turn red and the bonus will be over.

Collect Feature - The game also has a collect feature where you need to gather win combinations using the poker card symbols. A win on the 10 symbol will light up the 10 in the poker hand in the top right of the screen. A win on the Jack symbol will do the same, and so on up to the Ace symbol. Once you have collected your Royal Flush a set of cards will appear face down on the screen and you’ll click on each one to reveal what prize the card holds. There will be a combination of coin wins and sheriff badges. However, there is a chance that all five of the cards will reveal sheriff badges. If this happens you will win the game’s big jackpot.

Gunslinger Reloaded is so similar to the original Gunslinger game that I’m not convinced their own mothers could tell them apart. The symbols are all the same, except they’ve been given a slight facelift to make them look that little bit more attractive. Gunslinger was a solid game, so Gunslinger Reloaded will not disappoint unless you are looking for a brand new cowboy game with features you’ve never played before. Now, if you haven’t played the original then there’s plenty here to keep you engaged. The game has lots of bonus features, with a main bonus that feels like a proper computer game. You have free spins and a collect bonus along with the usual wilds and scatters. And it is the Scatters that you’ll see one of the key differences, with the pay outs for them substantially higher than in the original game. The house edge is the same, but most Play ‘n Go games are sitting at 4%, so it’s far from a surprise.