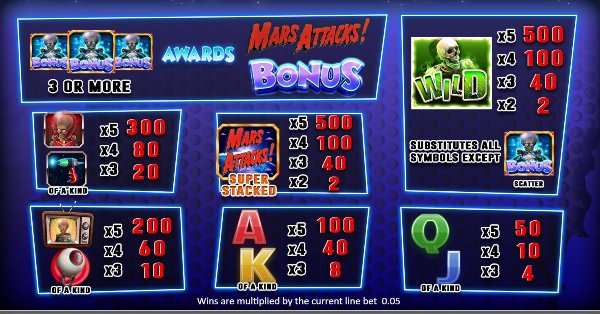 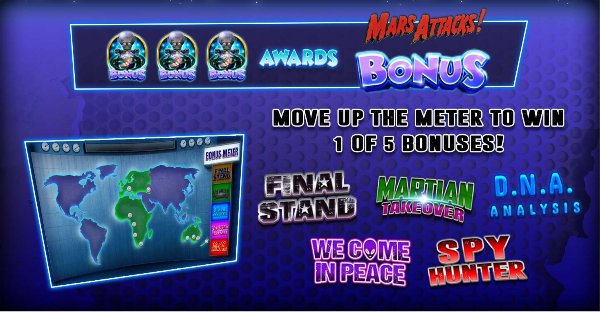 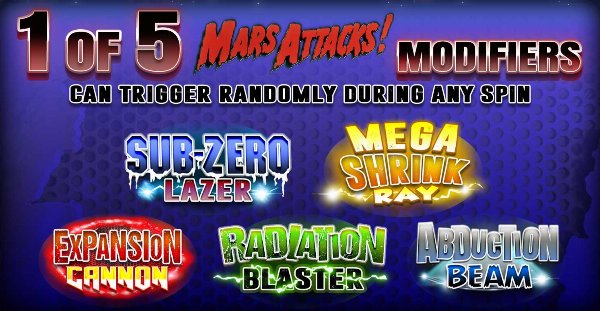 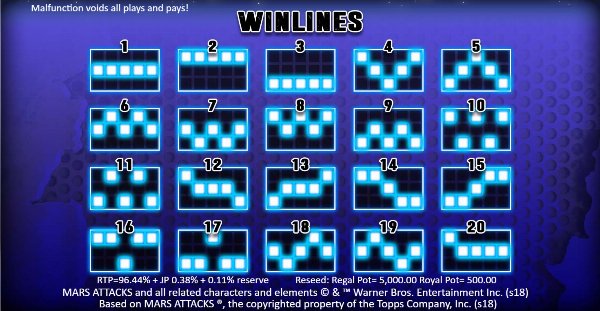 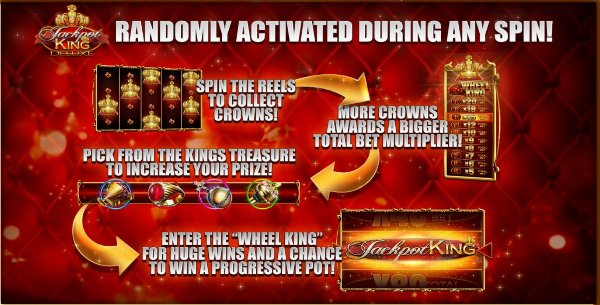 The Mars Attacks! slot is produced by Blueprint Gaming. Blueprint Gaming are one of the smaller slot development companies on the market at the moment and do not offer their own casino platform. Instead they lease their games out to casinos using other platforms. Blueprint Gaming do not always publish the RTP information for their slots in the paytable. However, in this instance they have done, which means we know that the house edge for Mars Attacks! is 3.56%.

Mars Attacks! is a 5 reel slot, with 20 paylines in total, paying from left to right.

Wild – The Wild symbol will substitute for all symbols other than the Bonus symbol.

Bonus – The “Blue Martian” symbol is the Bonus. You need 3 or more of them to trigger the feature.

The Mars Attacks Modifiers can be triggered on any spin. They are:

Radiation Blaster - Places Wilds onto the reels in random positions.

Mega Shrink Ray - The reels will shrink so that 5 symbols appear in each reel. Wins are then paid for any consecutive symbols left to right regardless of position (3125 ways to win).

Abduction Beam - The symbols on the reels will be taken away by the Mothership and a new reel set will cascade onto the screen.

Expansion Cannon - A Mystery Symbol will be placed onto the reels which will begin to spread to nearby positions, eventually all Mystery Symbols in view will transform into a randomly selected symbol.

Sub-Zero Lazer - Winning symbols will be frozen in place and the reels will re-spin, the reels will continue to re-spin until the win is no longer improved.

Bonus – When you trigger the Bonus feature you will need to firstly choose which region you want to see invaded. There are 5 regions: Europe, Asia, Africa, Australia and America (South and North). Then one of the following bonus rounds will be awarded:

Spy Hunter - Pick Suspects from a board to reveal Martians or Humans. Every Martian revealed will award a cash multiplier. Revealing 3 Humans will collect the current bonus winnings. Finding the Martian Ambassador will award a big money boost to your winnings and end the feature.

We Come In Peace - The player selects from containers which fill the banks at the sides of the screen. Once a bank has been filled its value will be awarded in the bonus winnings panel and 1 of the following will be presented:

Multiplier: A new multiplier is displayed in the Bank and the feature continues.

Big Money: When filled again awards a Big Money boost to your bonus winnings and ends the feature.

The feature ends when the player reveals the 'Martian Orb' which explodes and collects the bonus winnings.

Final Stand - The player will be taken to a new screen and awarded unlimited Free Spins on a 3x5 reel set. On any spin a special Advance Symbol can appear on reel 2 for the Humans and reel 4 for the Martians. Either or both of these symbols appearing will cause their respective progress bar at the bottom of the screen to fill by 1 segment. The Humans will multiply wins and the Martians will eliminate symbols at specified milestones of the progress bar. The first progress bar to reach the final segment will end the feature. If the Humans win the player will be awarded an additional boost to your winnings. If you land 5 Bonus symbols then you trigger the Final stand automatically.

– If you land 4 Jackpot symbols on any spin then you will trigger the Jackpot King Deluxe feature. During this feature only Jackpot symbols will be made available. The more you land the further up the pay table you will move. You need to land 15 to trigger the Wheel King Bonus. After each spin you will have to choose from 1 of 3 icons which will reveal one of the following:

Spin – If this appears you will get to spins the reels again.

Collect – If this appears the feature will end and you will be awarded the amount identified on the pay table.

Wheel King – If this appears you will head straight to the Wheel King Bonus. The Wheel King Bonus can also be won if you managed to land 15 or more Jackpot symbols on the reels. When this happens you will be given a spin on the Wheel that comes with a series of multipliers. The one you land will be applied to your overall winnings as indicated on the pay table. The Wheel also contains access to the progressive Jackpots.

Feature Gamble – You have the chance to gamble the feature you have been given for a chance to win another feature. However, if you don’t win the feature will end and you will have lost your bonus, The Ancient Spirits of Evil cannot be won this way.

Mars Attacks! is another brilliant branded slots offering from those clever people over at BluePrint Gaming. You get the usual excellent looking slot filled with a myriad of features that will both excite and confuse in equal measure. You get random features, a bonus that can be any of 5 different versions and you get a jackpot. Add to this a low house edge and this has to be considered one of the best slots of 2020.