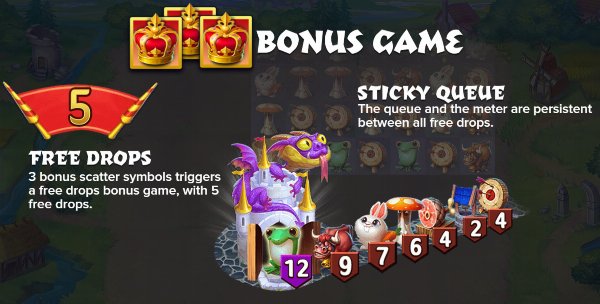 The Micro Knights slot game can be found at casinos offering Elk Studios software. Elk Studios are a small but quickly growing casino software developer primarily focusing on the mobile market. At the present time they only offer slots games. Players should be aware that this software provider includes ‘betting strategies’ as an automated feature. These should be avoided. They offer no mathematical gain to the player and increase the risk of large losses in comparison to your bankroll. As a standard Elk Studios do publish the RTP/House Edge information for their slots games within their game paytable. As such we can say that the House Edge of Micro Knights is 4%.

Micro Knights is a 7 reel slot and each reels sits a 7 symbols high. There are no paylines, instead you for clusters of 5 touching symbols or more. Each time you land a cluster the symbols involved will disappear and new symbols will drop down into their place, giving you another chance to win, filling up the feature meter as they do so.

The theme for Micro Knights is a Medieval one. This is a fun take on all things castle and knights all put together with a cartoon aesthetic that is somewhat reminiscent of Clash of Clans.

Wild – The Wild symbol I the “Goblet, which will substitute for all symbols other then the “Bonus Drops” symbol.

The Queue – The Queue appears at the bottom of the reels. When symbols are added to it, matching symbols are grouped together so that they only take up 1 symbol space but there can be more than one in that symbol space, making clusters easier to form. If a drop occurs then the symbols in the queue will drop back down onto the reels to fill the empty spaces.

Charging Knight – This is a random feature that can occur on any turn. The Knight sits at the left hand side of the reels can charge a row of symbols right off the reels, adding them to the queue and causing all symbols above to drop down before new symbols are added above.

Smashing Knight – This is a random feature that can occur once you have symbols in the queue. If it triggers he will add 1 additional symbol to each of the symbols waiting there.

Feature Flags – As was mentioned above, there is a meter in this slot that you fill after you have formed wins containing enough of the symbols to do so. For this to happens it is very likely that you need to land a number of symbol drops in a row. There are six features that can trigger, but each one will need the meter to be filled again, which should be easier as the additional features are meant to make forming clusters more easy. The features and the order they trigger in are as follows:

Inferno – This will remove all low value symbols on the grid, create another drop and give you another chance to win.

Extra Wilds – Between 3 and 15 additional wilds will be added to the reels.

Super Size – A big symbol will be dropped on the reels in a random position.

Charge – This will move between 2-5 rows into he queue.

Epic Charge – This will move all rows into eh queue.

Boosted Queue – All symbols in the queue are used to created winning clusters.

Free Drops – If you trigger the Free Drops you will be given 5 Free Drops, during which the queue and the meter never revert back to empty and instead remain sticky throughout the feature.

This slot is stunning. It has everything that I would want a cluster based slot to have. You get features that build with each consecutive drop, you get Free Spins and you get Wilds. However, the betting strategies that Elk continue to include remain a major issue. They offer no advantage and could in fact be considered a dangerous inclusion in a game that is based entirely on random chance. The implication that skill or a tactic can be in any way deployed is one that we cannot endorse, no matter how good this slot might be. So it is with a fair degree of regret that we cannot give Micro Knights a positive review.