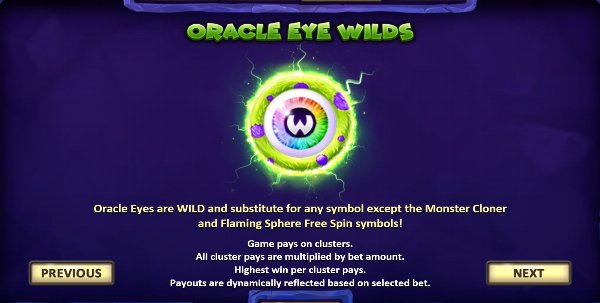 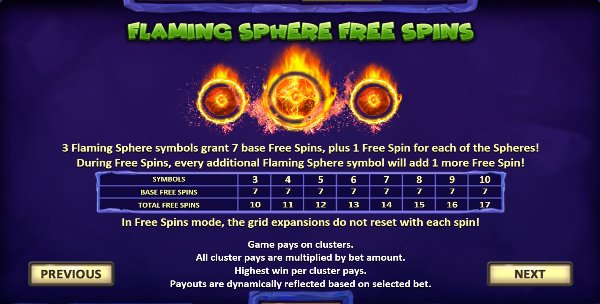 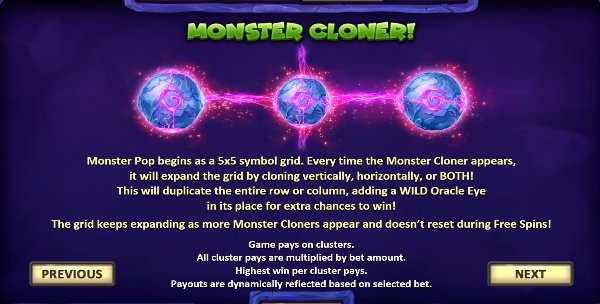 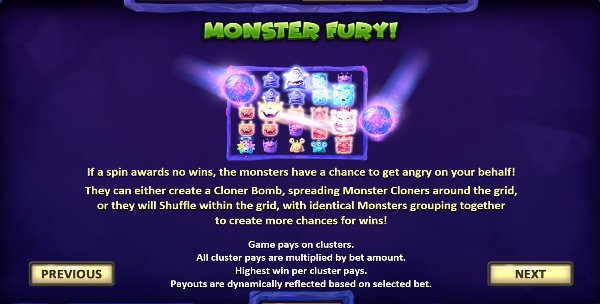 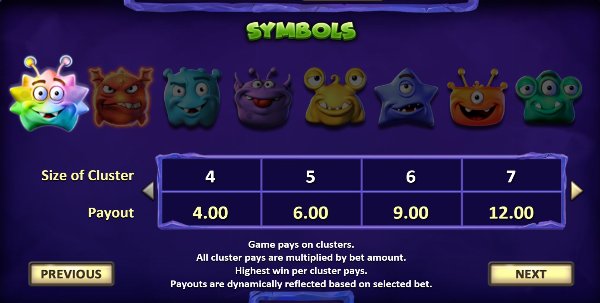 The Monster Pop slot game is produced by BetSoft. BetSoft are one of the smaller slot development companies on the market at the moment and have recently started offering their own casino platform. The company was founded in 2006, entering the slots market 4 years later. Betsoft do publish the Return to Player (RTP)/House Edge information for their slots within the game help files. As such we know that the house edge for Monster Pop is 3.33%.

Monster Pop plays over 5 reels, each one 5 symbols high. Although it is worth noting that the size of the reels can change as you play. Instead of paylines you form clusters of 4 or more symbols that sit adjacently to each other, either vertically or horizontally.

Tumbles – Every time you form a winning cluster the symbols involved will disappear, remaining symbols will fall down into their place and new symbols will drop down to give you another chance to win. This process will continue as long as you keep on landing winning clusters.

This slot has a sort of science fiction/monster theme to it. The monsters are cute and cuddly and given the world they appear to inhabit it is likely that they are more alien than monster. With this one you want to be thinking about slots like Reactoonz as a frame of reference.

Wild – The Wild symbol is the “Oracle Wild Eye”, which will substitute for all symbols other than the “Monster Cloner” symbol and the Free Spins symbol.

Free Spins – The Free Spins symbol is the “Flaming Sphere”. 3 of them anywhere on the reels at once will trigger the Free Spins feature.

Monster Cloner – The “Monster Cloner” symbol is a blue and pink sphere. Every time one lands it will clone the reel it lands on vertically, horizontally or both to increase the number of reels on the grid and your chance of landing a win. More than one “Monster Cloner” can land on the reels on a single spin. You can land additional symbols during tumbles to increase the size of the grid further but once no more wins have been formed the reels will reset to 5x5 .

Monster Fury – This is a random feature that will only have an chance of triggering in the result of a non-winning spin. If this happens either a number of “Monster Cloner” symbols will be added to the reels or the symbols will shuffle around and group together to form clusters.

Free Spins – If you trigger the feature you will be given 7 Free Spins, plus an additional spin for every triggering symbol. So, 3 symbols would award 10 Free Spins; 4 would award 11, etc. During the Free Spins when you expand the reels with the “Monster Cloner” they will not reset to 5x5 when your tumbles end and will instead remain at that size for the rest of the feature, or until they expand again.

Monster Pop is quite simply, an excellent slot. I said in my description of the theme that it reminded me of the Play ‘N’ Go slot “Reactoonz”, and whilst that take a little of the shine off it is still great entertainment. The tumbles mean that you feel as if something exciting can happen on any spin, as do the “Monster Cloner” symbols. I like the Free Spin modifier, with the expanding reels remaining that way throughout and along with the design of the slot I really like how low the house edge is. Honestly there is little to criticise here.