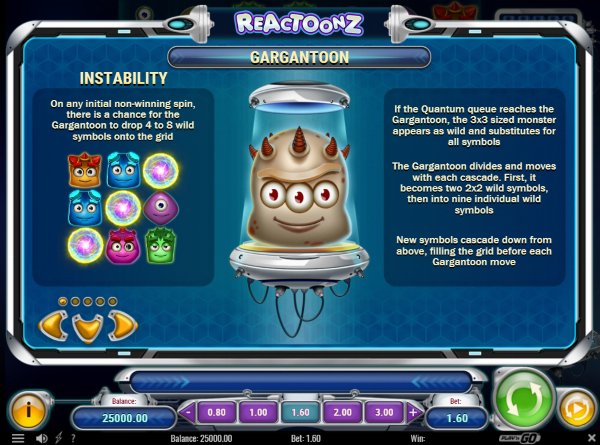 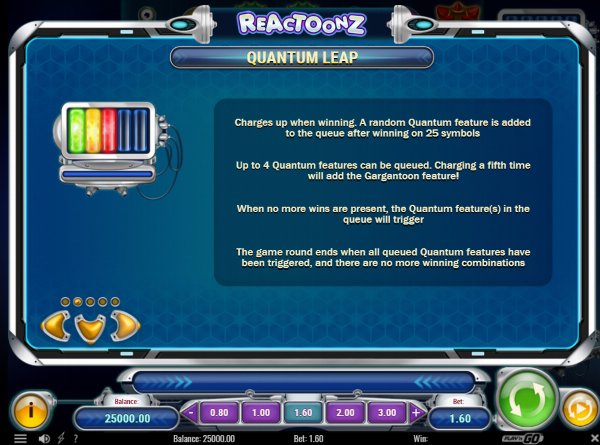 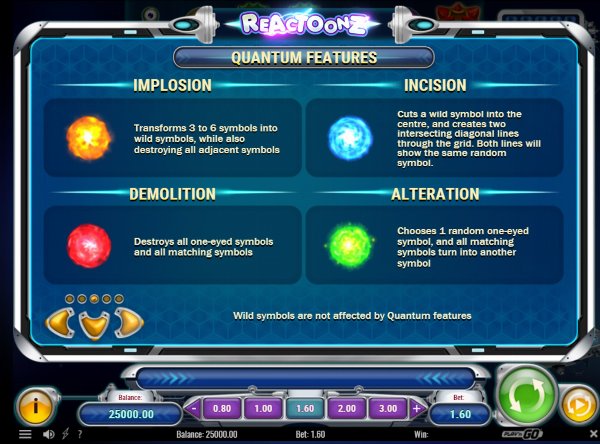 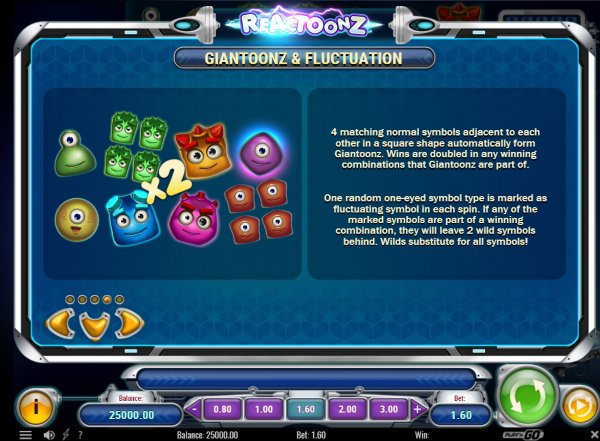 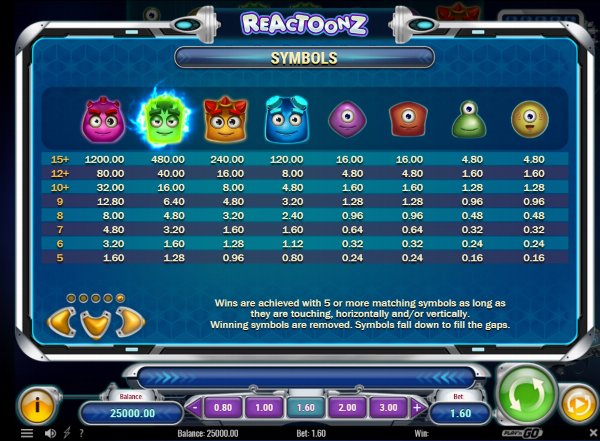 The Reactoonz game can be found at casinos offering Play ‘n Go software. Play ‘n Go are a growing providers in the industry and have a rapidly expanding portfolio of both slots games and clients. They do offer a full casino platform, but primarily seem to be used as a bolt on package for extra slots games. Play ‘n Go do publish the Return to Player (RTP)/House Edge information for their slots games within the game help files. As such we know that the house edge for Reactoonz is 4%.

The Reactoonz game does not use the standard slots game format. There are no traditional reels or paylines. Instead there is a 7x7 grid of symbols that generates a win when clusters of aliens from the same alien race are formed. Clusters are made up of 5 or more matching aliens that are horizontally or vertically adjacent. When you align a cluster, the aliens that form it will disappear from the screen, leaving space for more symbols to drop down and provide an additional chance to form a cluster. The bigger the cluster, the bigger the payout.

The Wild symbol is the “Flux Capacitor”.

Instability – During any, non-winning play, between 4 and 8 Wild “Flux Capacitor” symbols can randomly drop down onto the grid to create more chances to win.

Quantum Leap – The Quantum Leap feature is represented by a machine that sits in the top right-hand side of the screen and fills with energy each time you land a winning cluster. Once you have landed enough clusters to include 25 symbols, one of the random Quantum features be added to the machine, identified as one of five coloured rods. If all five rods are triggered, you hit the game’s big bonus. At this point, all stored wins will have been played and the Quantum Leap machine will reset to zero. Failing to land a cluster will signal an end to the queuing system and will trigger any rods that you have managed to add to the Quantum Leap machine.

Implosion – This feature can be identified by the orange/yellow rod within the Quantum Leap machine. Implosion will trigger between 3 to 6 Wild “Flux Capacitor” symbols to appear at random throughout the grid. It will remove all adjacent symbols in the process.

Incision – This feature can be identified by the blue rod within the Quantum Leap machine. Incision will insert a Wild “Flux Capacitor” symbol into the centre of the grid. Two diagonal lines will then run all the way through the grid and through the Wild symbol from corner to corner. The two lines will be filled with the same randomly selected symbol.

Demolition – This feature can be identified by the red rod within the Quantum Leap machine. Demolition will remove all symbols containing aliens with one eye and all matching symbols.

Alteration – This feature can be identified by the green rod within the Quantum Leap machine. Alteration chooses a single one eyed alien symbol and all other symbols that match it and turns them all into another randomly selected symbol.

Gargantoon – Gargantoon is a three-eyed alien who sits in the bottom right hand corner of the screen for most of the game. His special feature is triggered when you manage to fill every single rod in the “Quantum Leap” machine. The first thing that happens is that Gargantoon enters the grid as a 3x3 cluster and acts as Wild. Once the clusters have formed from this, new symbols drop down along with two 2x2 Gargantoon symbols, again acting as Wilds. After this set of winning clusters drops down, the grid fills again and this time 9 individual Gargantoon Wild symbols appear in the grid.

Reactoonz is a pretty complex and engaging slots game. The game looks fantastic, with bright, vibrant symbols that are in a constant state of downward trajectory. It is fast paced and injected with blue and purple pulsing light. There is action outside of the grid as well, as the Quantum Leap machine fills with whirlpools of light sucked in from the main grid to fill up the coloured rods and add a degree of anticipation to the game. During the build up towards his main bonus, Gargantoon’s facial expressions appear to change as he anticipates his own involvement. The only down side is with the games predictably disappointing 4% house edge. Whilst there are games providing better value for money, there aren't many offering better entertainment.