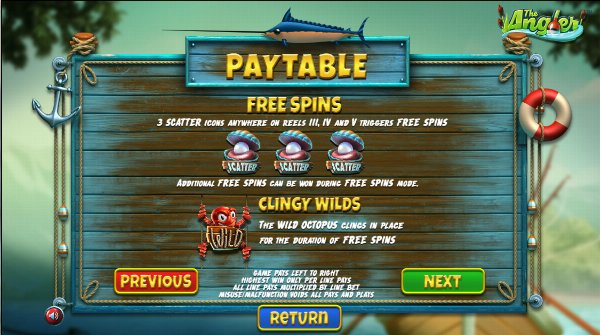 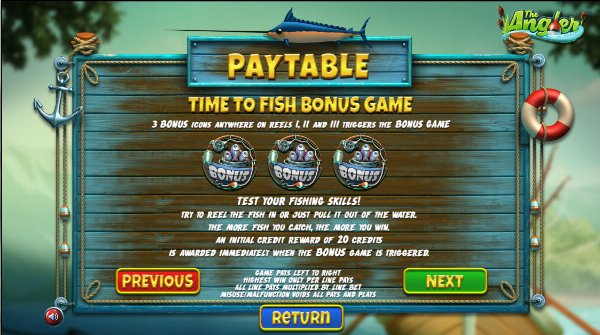 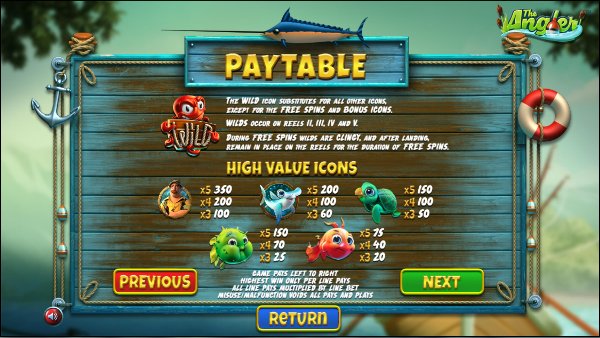 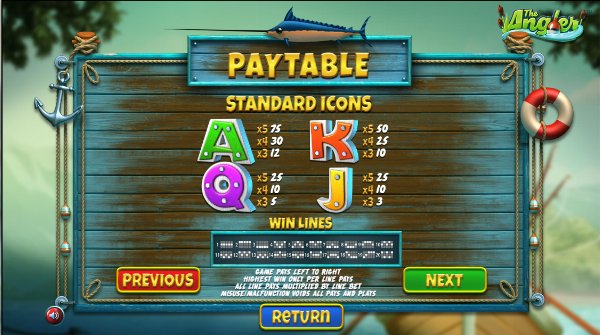 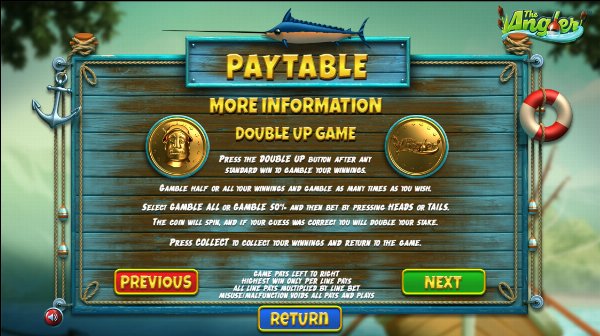 The Angler slots game is produced by BetSoft. BetSoft are one of the smaller slot development companies on the market at the moment and have recently started offering their own casino platform. The company was founded in 2006, entering the slots market 4 years later. Betsoft do publish the Return to Player (RTP)/House Edge information for their slots games within the game help files. As such we know that the house edge for The Angler is 2.9%.

The Angler game has 5 reels and each reel is 3 symbols high. The game uses traditional paylines, 20 in total, playing from left to right.

Wild – The “Octopus” symbol is Wild, substituting for all symbols other than Free Spins and Bonus symbols. Wilds only appear on reels 2, 3 , 4 and 5.

Bonus - The “Bucket of Fish” symbol is the game’s bonus symbol. 3 or more will trigger the bonus game, with symbols only appearing on reels 1, 2 and 3.

Free Spins – If you can land an “Oyster” symbol on reels 3, 4 and 5 you will be awarded with 8 Free Spins. During the feature any Wilds that you reveal with remain in place of the duration of the Free Spins. The feature can be re-triggered in the same way that it was initially triggered.

Bonus – If you can reveal 3 “Bucket of Fish” symbols on reels 1, 2 and 3 then you will trigger the bonus game. When this happens you will play the part of the angler (Otis), where you will attempt to catch the biggest fish that you can. Cash prizes are on offer here, with bigger prizes coming with bigger fish.

The Angler is a very simple game at heart. However, despite its simplicity, a lot of effort has clearly gone into making the game look special. Otis is a typical looking fisherman, at home on his boat with mountains sparkling behind him in the background. The symbols are all fun looking with bright cartoonish colours to help bring the game to life. The features, whilst simple are fun and engaging. There are Free Spins, Wilds and a Bonus feature. The bonus is a fun sort of click and reveal game, whilst the Free Spins come with additional features, like sticky wilds and can be re-triggered. Essentially, what you have here is a simple game, with every feature you would want that also happened to look great. When you add in a very reasonable house edge you are left with an excellent game, one we would thoroughly recommend.