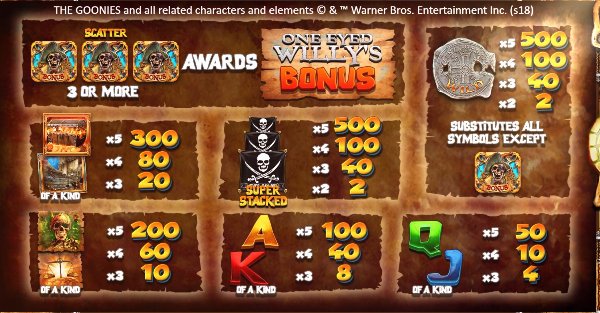 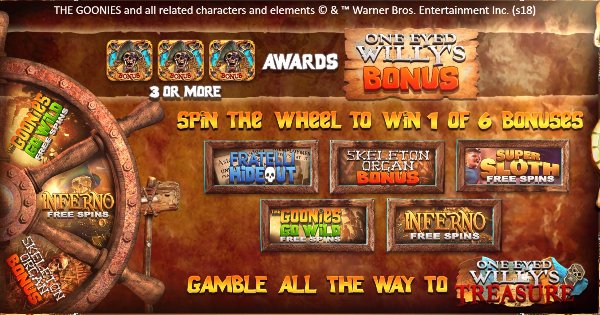 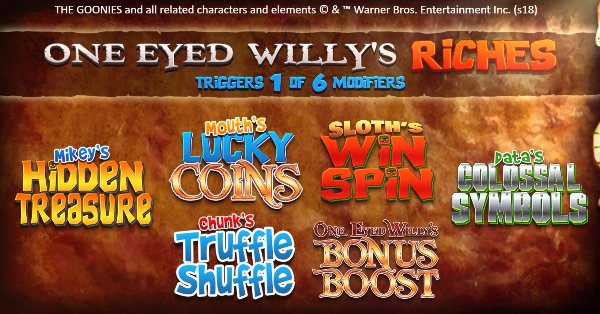 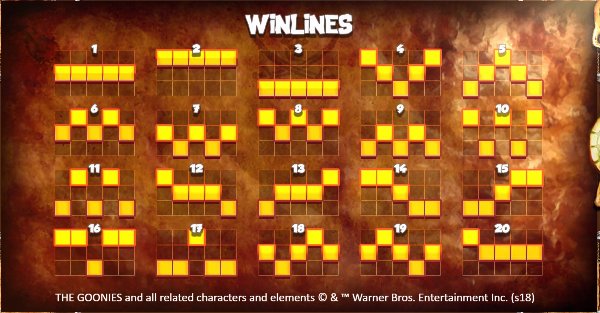 The Goonies slot is produced by Blueprint Gaming. Blueprint Gaming are one of the smaller slot development companies on the market at the moment and do not offer their own casino platform. Instead they lease their games out to casinos using other platforms. Blueprint Gaming do not always publish the RTP information for their slots in the paytable. However, in this instance they have done, which means we know that the house edge for The Goonies is 4%.

The Goonies slot uses 5 reels that are 3 symbols high. The slot uses traditional paylines, with 20 in total, playing from left to right.

Wild – The Wild symbol is the “Silver Coin”, which will substitute for all symbols other than the Bonus symbol.

Bonus – The Bonus symbol is the “One-Eyed Willy”. 3 or more of them anywhere on the reels in a single spin will trigger the Bonus feature.

One-Eyed Willy Bonus – If you trigger the Bonus feature then you will need to spin the wheel to decide which of the six available bonuses you get to play. Each one is described below:

Fratelli Hideout Bonus – Here you need to click on symbols to reveal either an instant cash prize, based on the size of your bet, the end of the feature or the chance to tunnel towards one of the remaining 5 bonus games.

Skeleton Organ Bonus – Here you need to click on symbols to reveal multipliers that will be applied to the bet. The multipliers come in the form of characters, with their values displayed to the left of the game. You have 3 lives and if you land 3 Jolly Roger symbols the game will end. You can also collect 3 Key symbols, which will take you to an additional feature.

Super Sloth Free Spins – During this feature Super Sloth Wilds become active. If they land then they will turn any Fratelli family symbols into top paying symbols. At the end of the Free Spins you are given further chances either win additional spins, a One-Eyed Willy Treasure Bonus, or the feature will end.

Goonies Go Wild Free Spins – During this feature, at the start of each spin after spin number 1, a top paying symbol will be selected at random to become a Wild symbol. At the end of the Free Spins you are given further chances either win additional spins, a One-Eyed Willy Treasure Bonus, or the feature will end. If you win the Free Spins then you will be given 5 in total and the “Goonies” symbol will turn Wild.

Inferno Free Spins – During this feature, with each spin an inferno will move across the reels and turn up to 3 reels fully wild. At the end of the Free Spins you are given further chances either win additional spins, a One-Eyed Willy Treasure Bonus, or the feature will end.

One-Eyed Willy's Treasure Bonus – To play this feature you need to land it via another bonus, gamble a bonus to play it or land 5 Bonus symbols. A series of multipliers will be awarded at random and applied to the bet. The feature will end when the booby-trap feature is landed.

Feature Gamble – Before you play a Bonus feature you have the chance to gamble it. If you gamble and win then you will be given a different bonus option. If you don’t like that option then you can continue gamble, until you reach the top feature ot you land a Mystery Prize, an instant prize based on the bet amount.

One-Eyed Willy's Riches – There are a series of features that can be triggered on any spin, completely at random. Each one is described below:

Truffle Shuffle Wilds – A random number of Wilds can be added to the reels.

Mikey's Hidden Riches – Any of the reels can be transformed into a fully stacked set of Wilds.

Mouth's Lucky Coins - The Mystery symbol are added to the reels in the form of “Gold Coins”. A symbol will be chosen at random and all “Gold Coins” will be turned into that symbol.

One-Eyed Willy's Bonus Boost - Additional Bonus symbols can be added to the reels.

The Goonies is a stunning slot that makes the absolute most of its source material. It is not just characters and symbols from the film that populate the reels but also sounds and catch phrases from the film. When I say you get a lot of features, how does 6 bonus features and 6 random features sound. This is a slot that is almost as entertaining as the film was. The house edge is offering some value, but nothing too special and would be the only downside to what is an otherwise excellent slot.