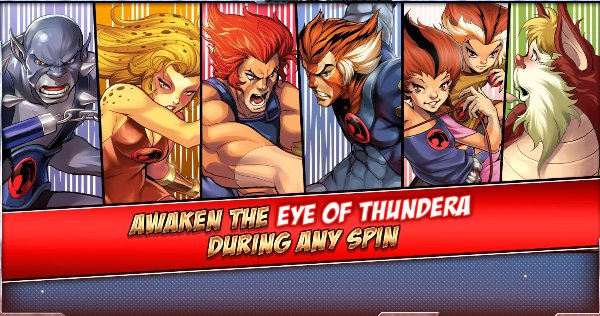 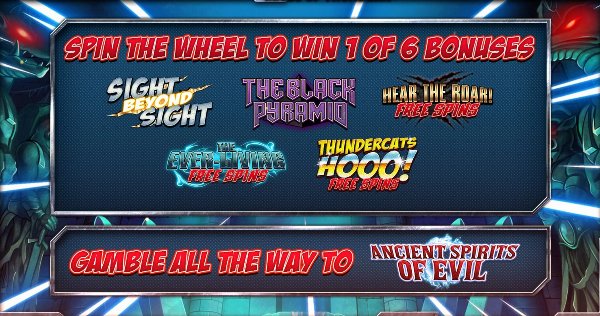 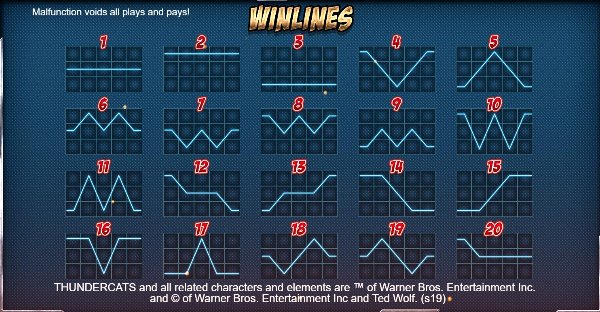 Thundercats: Reels of Thundera is a 5 reel slot that uses traditional paylines, with 20 in total, playing from left to right.

This slot is based on the hugely successful 80s cartoon series, set in the world of Thundera, where a group of heroic cat people fight off the threat of the terrifying Mumm-ra and his dim-witted cronies. For children growing up in the 80s and 90s the Thundercats were likely to be a viewing staple, with boys and girls taking to the playground to take turns at being Lion-O and Panthro.

Wild – The Wild symbol will substitute for all symbols other than the Bonus symbols.

Bonus – The Bonus symbol is the “Thundercats” symbol. You need to land 3 of them anywhere on the reels at once to trigger the Free Spins feature.

Thundercats Modifiers - The slot comes with a series of modifiers that can be trigger at random on any spin. They are as follows:

Lion-O – This feature will add additional Wilds to the reels.

Tygra – This feature will result in a reel being swiped with a chance to turn it completely. If this happens and results in a win, the modifier will be retriggered.

Panthro – If this modifier triggers it will link reels together turning them identical. This can only happen between reels 2 and 5 and can result in all 2 or 3 reels doing so.

Cheetara – If this modifier triggers then all the symbol on the reels will be shuffled and put into different places. This can happen up to 5 times.

Wily Kit and Wily Kat – If this modifier triggers then mystery symbols will be added to the reels. These will spin around revealing the same symbol under each one.

Snarf – This modifier adds Bonus symbols to the reels, increasing your chance of trigger the Bonus feature.

There are also the following modifiers that trigger when you fail to land a win.

Cheetara will award a 5-of-a-kind win.

Cheetara will upgrade random symbols to the Thundercats symbol.

Sword of Omens – Removes random symbols and creates an avalanche, adding new ones to the reels. Or all symbols are removed and a new set are added to the reels (a respin).

- If you trigger the Bonus you will need to spin a wheel to decide which of the 6 Bonus features you play.

Sight Beyond Sight – You then have to pick an Eye of Thundera symbol to reveal one of 4 different features: Lion-O will increase the cash multiplier, Thundercats Logo will upgrade the Cash Multiplier values, Mumm-Ra will end the feature and the Thundertank will move you along to the next Bonus.

The Black Pyramid – Lion-O will move you along the pyramid, Mumm-Ra will end the feature and the Thundercats logo will increase the value at the top of the pyramid. If you get to the top you will be given an instant prize before being moved on to the next bonus.

The Ever-Living Free Spins – A multiplier will be in play during g each spin that will be worth between x2 and x5 the bet and will change each time. If 2 Mumm-Ra symbols land you will be given additional spins.

Thundercats Hooo! Free Spins - During any spin, any Wild that lands in view will be held in place until the end of the feature. Filling a whole reel with Wilds will award 5 additional Free Spins.

Ancient Spirits of Evil - Triggered by collecting 5 Bonus symbols or landing on the Ancient Spirits of Evil segment during the Bonus. The player selects from emblems to reveal 1 of 5 outcomes. Lion-O (Spins the Wheel); Thundercats Logo (Moves the player to the next ring); Mumm-Ra (ends the feature); Red Arrow (adds more Red Arrows to the wheel); Upgrade (increases values on the Wheel). Landing on a Cash Value will replace that section of the Wheel with a Red Arrow. Landing on a Red Arrow will move the player to the next ring. Reaching the centre of the Wheel will award Ultimate Thunder Bonus.

Ultimate Thunder Bonus – This takes all your winnings from the Ancient Spirits of Evil and gives you the chance to apply a multiplier to what you have won.

Feature Gamble – You have the chance to gamble the feature you have been given for a chance to win another feature. However, if you don’t win the feature will end and you will have lost your bonus, The Ancient Spirits of Evil cannot be won this way.

Like many of the Blueprint branded slots out there, this one is filled with a lot of very exiting features. First off, you get 6 different random features, plus an additional 4 if you fail to win. The bonus feature comes with 6 different options, including the Ancient Spirits of Evil feature that can also trigger if you can land 5 Bonus symbols on the reels at once. The house edge could be offering better value for money but is still good enough for us to recommend this slot.