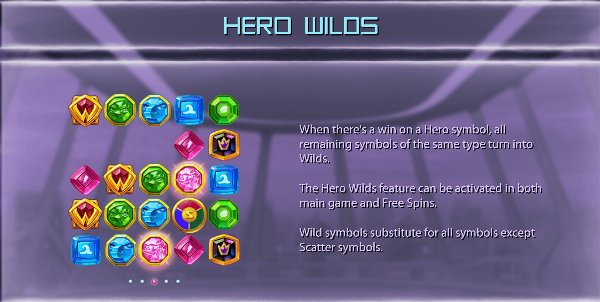 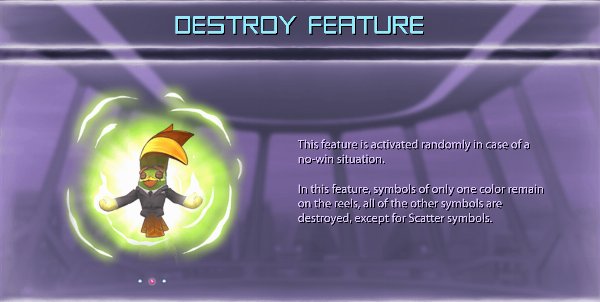 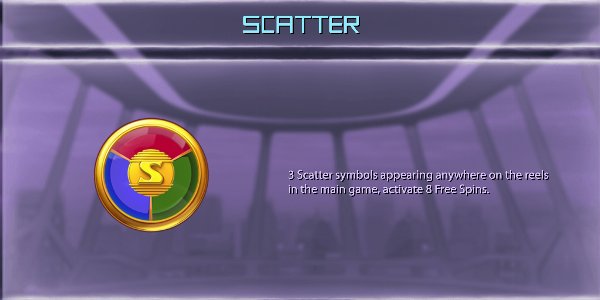 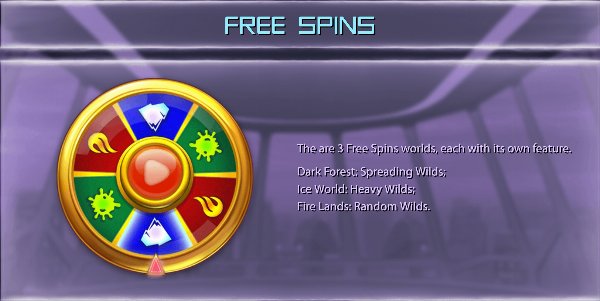 Wild Worlds plays on a 5x5 grid and does not use traditional paylines. Instead you form wins through symbol combinations of 3 or more identical symbols, either vertically or horizontally on the reels. A single row or column can contain more than one win and wins can interest or overlap on the same row or reel.

Avalanche – After you have formed a winning combination, the symbols involved will be destroyed and new symbols will drop down in their place, giving you another chance to win.

Scatter – The “S” symbol is the Scatter. 3 of them anywhere on the reels at once will award you with 8 Free Spins.

Hero Wilds – When you win on a Hero Symbol, all remaining symbols of that type will turn into Wilds, giving you another chance to win. Hero Wilds are available in the base game and the Free Spins.

Destroy Feature – This is a random feature that can only active after a non-winning spin. If it is activated then only one type of symbol will remain on the reels. All other symbols are destroyed, except for Scatter symbols and new symbols drop down in their place, giving you another chance to win.

Free Spins – Before you begin the Free Spins Feature, after you have landed 3 or more of the Scatter symbols anywhere on the reels you will have to spin the wheel to decided which Free Spins world you get to play in: You will play in either the Dark Forest World, the Ice World or the Fire Lands. Each different Free Spins World comes with its own unique feature:

Dark Forest – When a Captain or a Boss weak spot is destroyed a Spreading Wild is added to the reels. If the Spreading Wild helps to form a win then it and the symbols is has combined with will explode and new Spreading Wild symbols are added to adjacent positions where the previous symbols used to be.

Ice World – When a Captain or a Boss weak spot is destroyed 2 Heavy Wild symbols are added to the reels. If the wilds combine to form a winning combination then they will remain in place after the avalanche.

Fire Lands – When a Captain or a Boss weak spot is destroyed between 2 to 4 Random Wilds are placed randomly on the reels.

Hero Attacks – Each Hero has a corresponding low and medium win symbol which will be used to change its Hero Meter. You need 3 charges to fill the Hero Meter. Each win involving the corresponding symbols will charge one part of the meter. Once the meter is full you will activate the Hero Special attack:

Monsters – There are two types of Monster in the game: 3 Captains and 1 Boss. Captains have 15 health points and will award the special feature that is available in whatever Free Spins world you are playing in when reaches zero health. The Boss has 105 health. If you can destroy him you will be transported to a different Free Spins world, with new captains and 8 new Free Spins.

In Wild Worlds, Net Entertainment are really pushing the boundaries of what you can expect from a slots game. It looks incredible and has a truly astonishing number of features. To say that this game is complicated would be an understatement. If you like your games simple then maybe this one is best left alone for now. There are no paylines, instead you form combinations. There are wilds and scatters that award you with Free Spins. There are symbols that pay out extremely well if you can trigger them. Then things get a little crazy: You fight monsters in 3 different Free Spins worlds, each world with its own unique feature that you trigger when you finally vanquish the bad guys and you do all of that by filling various meters. This is not a game for the faint of heart or a slots traditionalist. What it is, is a slots game that is trying to do something different and succeeding with fantastic results. On top of all of this there is decent value on offer with a good house edge.