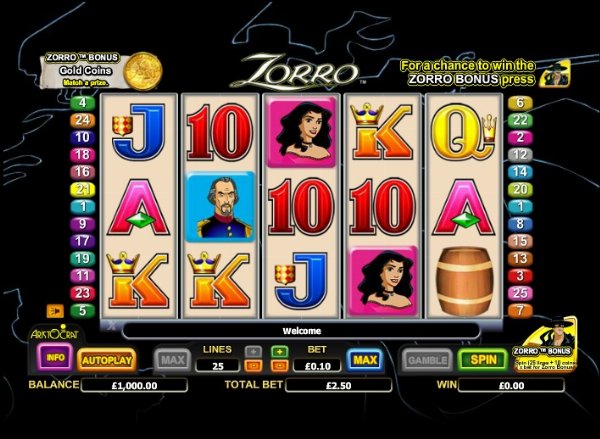 The Zorro slots game can be found at casinos offering Aristocrat software. Aristocrat are a major producer of offline slots betting terminals and have started to introduce a small selection of their games into the online casino markets. They do not publish the house edge/return to player (RTP) figures with their games but some of the casinos offering their games have started to publish this information. So far we’ve only found one casino – Video Slots – that has published this information for Zorro and they list the house edge as 4.5%. When playing at any other venue, this information should be used as a guideline only as the game may be configurable.

Who is the hero behind the mask?

The Zorro game has 5 reels, 25 payline and you can bet one coin on each of the paylines.

The ‘Zorro’ symbol is wild.

There are five bonus features when playing Zorro. To activate any of the bonus features you have to have the ‘Zorro’ extra bet feature on, which means you bet an extra 10 coins per spin. All bonus features are activated the same way when you receive the word Zorro in any positions across the 5 reels.

The second bonus feature randomly awards you a prize of up to 500x your line bet.

The fourth bonus feature takes you to a new screen showing 15 gold coins. Turn the coins over one at a time to reveal prizes. When you reveal 2 matching coins you receive that prize.

There’s certainly a lot going on in the Zorro game and for what it offers, it does so at a reasonable price.